Researchers at the Fraunhofer IOF in Jena have developed a camera system for the three-dimensional detection of objects with two high-speed, high-resolution, monochrome cameras and a GOBO projector. Temperature changes can play a role in typical dynamic applications such as crash tests or airbag deployment in addition to fast spatial processes. The Jena research team recently upgraded its system with a cooled high-performance thermal imaging camera from FLIR as part of a joint measurement project with the goal of creating a true 3D thermal imaging system with the ability to record at speeds up to 1000 frames per second.

The Fraunhofer Institute for Applied Optics and Precision Engineering (IOF, www.iof.fraunhofer.de) in Jena conducts application-oriented research in the field of photonics and develops innovative optical systems for controlling light—from generation and manipulation to applications. The service spectrum of the institute covers the entire
photonic process chain from opto-mechanical and opto-electronic system design to the production of customer-specific solutions and prototypes. Since 2019, this has also included a high-speed 3D thermography system with a scientific camera from FLIR.

The IOF team developed a high-speed 3D camera system back in 2016. This system consists of two high-speed black-and-white cameras in stereo arrangement and a self-developed GOBO projector for active lighting. The researchers have now added a thermal imaging camera to the system. They use a FLIR X6900sc SLS LWIR thermal imaging camera, which operates at frame rates of up to 1000 Hz at a resolution of 640 × 512 pixels.

Areas of application and objectives

The objective of the system is to combine highly dynamic spatial 3D and thermal data. Extremely fast processes such as an athlete in motion, a crash test, or the deployment of an airbag not only show rapid changes in surface shape but also changes in local temperature. In the past, it was not possible to capture these changes simultaneously. This has been achieved for the first time with Fraunhofer IOF’s new high-speed 3D thermographic measurement system.

How the system works

The system is based on two monochrome cameras that are sensitive in the visual spectral range (VIS). They operate at frame rates of more than 12,000 Hz and a resolution of one megapixel—although higher frame rates are possible at a lower resolution. However, the two cameras are not yet capable of producing meaningful 3D data in the desired quality. Furthermore, a sophisticated lighting system is required that projects an ultrafast sequence of stripe patterns. These patterns are similar to conventional sinusoidal stripes, but the widths of these stripes vary aperiodically. 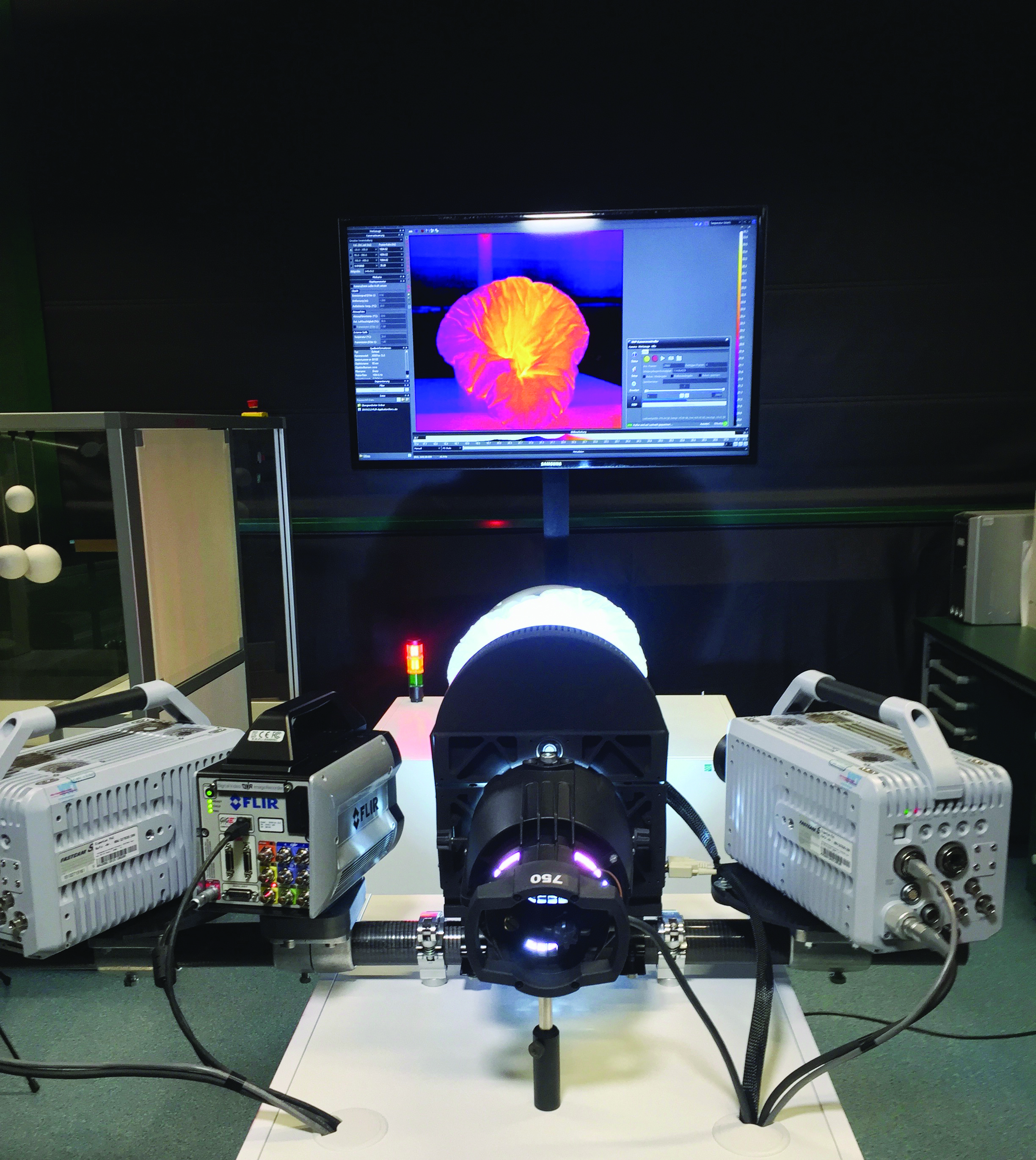 To achieve the desired effect, a glass pane was vapor coated with metallic stripes of chrome. This pane then rotates in a projector in front of the optical unit, thereby providing the stripe pattern necessary for the specific pixel assignment of both cameras. This principle is called GOBO projection (GOes Before Optics).

The FLIR X6900sc SLS operates in the longwave infrared range and is therefore not sensitive in the visible and near infrared wavelength range where the lamp of the GOBO projector emits radiation. Since heating of the object by the projected aperiodic sinusoidal patterns is also insignificant, the GOBO projector has no influence on the thermal imaging.

All three cameras record image data simultaneously during the measurement. The data from the black-and-white cameras, combined with the aperiodic stripe projection of the GOBO projector, produces the actual 3D image, for which sequences of 10 image pairs are normally calculated to form a 3D image. This "3D reconstruction" results in a spatial shape, over which the thermal image data of the FLIR LWIR camera is now superimposed in order to assign temperature values to the spatial coordinates in a mapping process. 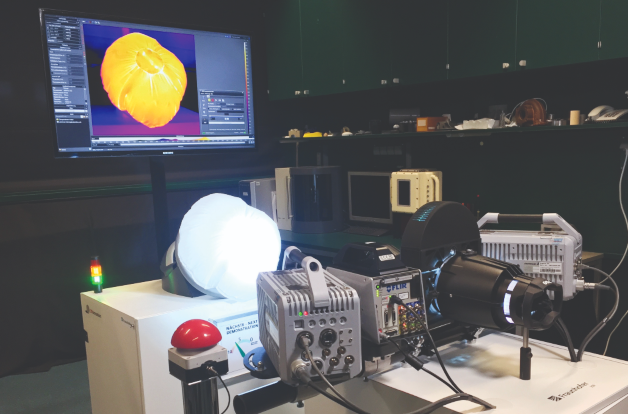 Of course, the system consisting of VIS cameras and a LWIR camera must be calibrated before the measurement. For this purpose, the IOF team uses a calibration board with a regular grid of open and filled circles. To ensure these structures can be detected in both VIS and LWIR even with homogeneous temperature distribution, materials with very different degrees of reflection (VIS) and emissivity (LWIR) were selected for the circles and background. The Jena researchers found a solution to this problem by using printed circuit boards. In doing so, they developed a very unusual circuit board consisting of a regular grid of open and filled circles instead of electrical connections between electrical components.

The system has now been tested in various scenarios. This included a basketball player dribbling a ball (which not only deforms the ball, but also causes thermal heating). Another possible application is the measurement of the temperature development and the spatial representation when an airbag is deployed. The system recorded the high-speed process from a distance of 3 m for half a second. By combining the three-dimensional data with thermal imaging information, it became clear not only how hot the airbag became as a result of the deployment but also at what point in time and at exactly which spatial coordinates. Such information can help to reduce and prevent the risk of injury to drivers in connection with airbag deployment. 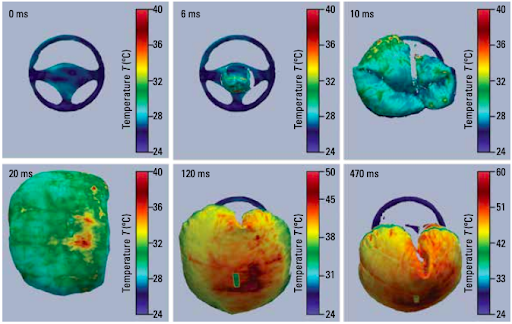 Martin Landmann from the IOF research team is certain: The possible applications for a combination of high-resolution 3D data and fast thermographic images are numerous. "Beneficial information can be obtained, for example, by observing crash tests, investigating deformation and friction processes, or extremely fast, thermally-relevant events such as explosions when an airbag is triggered or in a switch cabinet," explains Martin Landmann. He emphasizes that the system is continuously being developed and optimized. Therefore, we can expect to see more innovative research results from the Frauhofer IOF team in the future.