With the right mindset, anyone of any age can be a scientist. That’s what James Falletti is teaching his sixth graders through a research program called “Growing Beyond Earth,” which gives them the opportunity to test the viability of different plants for growing aboard a space station. Armed with the scientific method and specialized measurement tools like a FLIR ONE camera, these students are collecting data that might one day determine what crops are grown in outer space.

James Falletti is a STEAM educator, an approach to learning that integrates Science, Technology, Engineering, the Arts, and Mathematics to promote student inquiry, dialogue, and critical thinking. Don’t confuse it with STEM—STEAM goes a step further and can be applied to all classes in a curriculum, including subjects like art and history.

A “seasoned” educator, Falletti is a fifth and sixth grade science teacher and STEAM/Tech Integrator at the Corpus Christi School in New Jersey. His classes might not resemble what you remember from junior high—for one thing, Falletti never teaches out of a textbook. For another, his students are sending the results of their science experiments to astrobotanists at NASA.

Falletti’s goal in his classroom isn’t for his students to memorize facts for a test, but to begin thinking like scientists themselves. “I'll tell them, you guys are the astrobiologists, I’m your assistant,” he says, describing how his students problem-solve in real time while cultivating their crops in the classroom’s Growing Beyond Earth project.

The Growing Beyond Earth research project is operated by the Fairchild Botanical Gardens in partnership with NASA. Through the program, participating classrooms are sent a free kit (made by a company called MARSfarm) with equipment similar to NASA’s Vegetable Production System to test the viability of different crops for long-duration missions into deep space.

Now in its sixth year, more than 10,000 middle and high school students have participated in Growing Beyond Earth nationwide, and student research has directly led to the selection of two plant varieties (“Dragoon” lettuce and “Extra dwarf” Bok Choy) to be grown aboard the International Space Station so far.

Dragoon lettuce in a MARSfarm grow box. Components of the MARSfarm kit include temperature/humidity sensors for data logging, a camera to document growth, Red/Blue LED lighting for optimal efficiency, a Raspberry Pi computer to input climate recipes, and a programmable thermometer.

Falletti heard about Growing Beyond Earth through his connections to NASA, where he’s a Solar System Ambassador (SSA) and seat crew member for NASA's Houston Space Center. “I do a lot with NASA, and to try to incorporate technologies wherever I can to tie everything into space education, as well as eco-awareness,” he says. After being approved for the program, Falletti’s class was sent a kit with Dragoon lettuce seeds to set up and get to work planting.

His students love it. “It's something they're not used to, but they’re embracing it,” says Falletti. “Each day they're like, ‘Can I go measure?’ Absolutely. So, they know what they need to measure, from checking the humidity levels to checking the temperature levels, and they're having fun with this.”

“This is sixth graders,” he stresses. Eleven and twelve-year-olds who are collecting data and entering it into spreadsheets all on their own. And that data is being sent on to scientists at NASA. “It's a terrific program,” says Falletti. “The kids are learning about environmental sciences, they're learning about biology, life sciences, physics... they’re having a lot of fun with this and having a blast.” 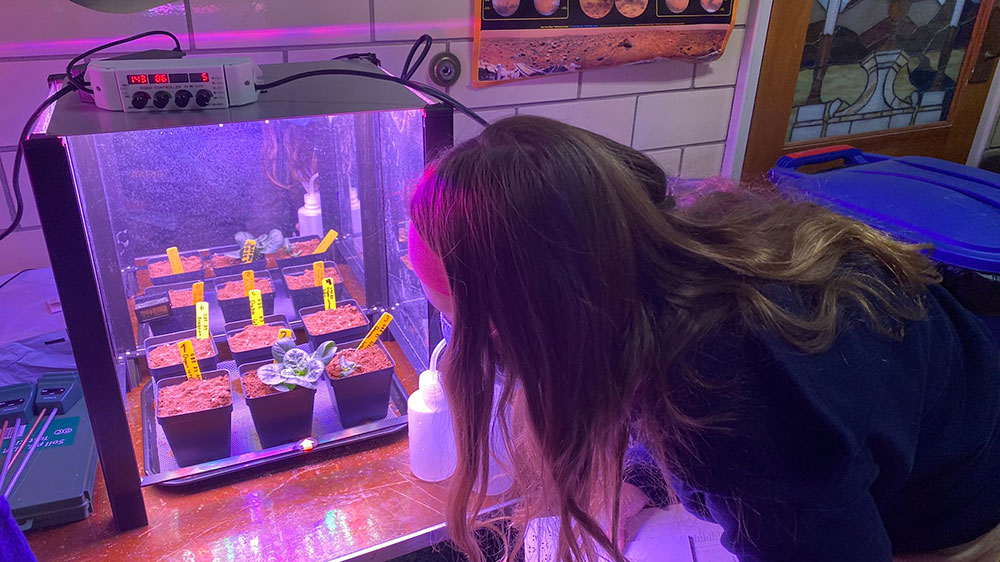 Student taking a closer look at the crops. Seeds were planted in clay, not soil, to simulate planting conditions aboard a space station.

As with any science experiment, the researchers are likely to encounter some unexpected results. After almost two weeks, they noticed only one lettuce plant growing, out of six pots with four seeds each.

A setback? Maybe. But it’s also an opportunity for the students to start applying the scientific method. In most science lessons, the teacher knows the answer to every question and the outcome of every demonstration. “This year? I don't even know the answer,” Falletti says. “I said, I'm actually going on this adventure, this journey with you guys. And it's exciting for me, and hopefully, for you. So, they’ve kind of taken ownership of it.”

“You guys are the scientists and I’m your assistant,” he tells his students. To solve the question of why their plants weren’t growing, the students began coming up with hypotheses for what might be wrong. “One kid would say, well, maybe the pH is off. Okay, we could test the soil. And another girl said, Well, if the pH is off in the soil, how about the water? Cool, we'll test them both. So we got our test kits, we got them together,” Falletti explains.

As they continued working through possible causes, a student hypothesized that the plants were getting too hot from the grow lights. “Well, I just happen to have this thing,” Falletti says, holding up his FLIR ONE Pro.

FLIR ONE image of the plants.

“I brought the kids out to the grow chamber, the veggie chamber, and we're looking, and where we poured the water… it was dark, like really dark. And they're like, why is it so dark?” After looking with the thermal camera, the students realized that the plants were only growing at the edge of the pots, where it was noticeably warmer. They hypothesized that the dark areas of the pot towards the middle might be too cold or too wet for the plants to germinate.

“So what we did,” Falletti continues, “is we took one extra seed leftover, so I planted it on the side. Within what, three, four days… we had a little plant coming up.” Using the scientific method and the tools they had on hand, the students had come up with a solution to the problem. “So now they get that ‘aha’ moment, which is gold for a teacher,” says Falletti. “That's why we don't use the book. Ask those questions, you get better answers.”

Students hypothesized that the darker (colder) areas of the thermal image might show where the clay was too wet for seeds to germinate.

The FLIR ONE as a Tool for Teaching

“It's been able to open up their eyes to our sixth sense, if you want to say,” Falletti says about the FLIR ONE, quoting the FLIR tagline. He took out the thermal camera more than once in lessons to help demonstrate thermodynamic concepts. In particular, the FLIR ONE has proved to be an invaluable tool to help overcome the barriers required for social distancing. When Falletti is demonstrating a chemical reaction, for instance, the thermal camera helps students see what’s going on, even if they can’t get up close.

“Without this, the kids wouldn't be able to see everything, because they had to stay six feet apart from everyone else,” he says. “What I was able to do is use this on my phone and show them the heat signatures, and show them how much it's growing or if it started cold.” With the FLIR ONE, students can see for themselves if a reaction is endothermic or exothermic and get a better view even from a distance.

The students have also been able to look at the class pet, a snapping turtle, in thermal while learning about hot-blooded vs. cold-blooded animals. They went searching for hot-blooded mammals while out on a hike, using clues like the heat signature and footprints in the mud to deduce they had found a raccoon. “It's a lot of fun, and we try to incorporate it in as much as we can,” Falletti says. “We're taking the natural world, connecting it with technology, and opening up a brand-new, fun, exciting experience with them. That's major.” 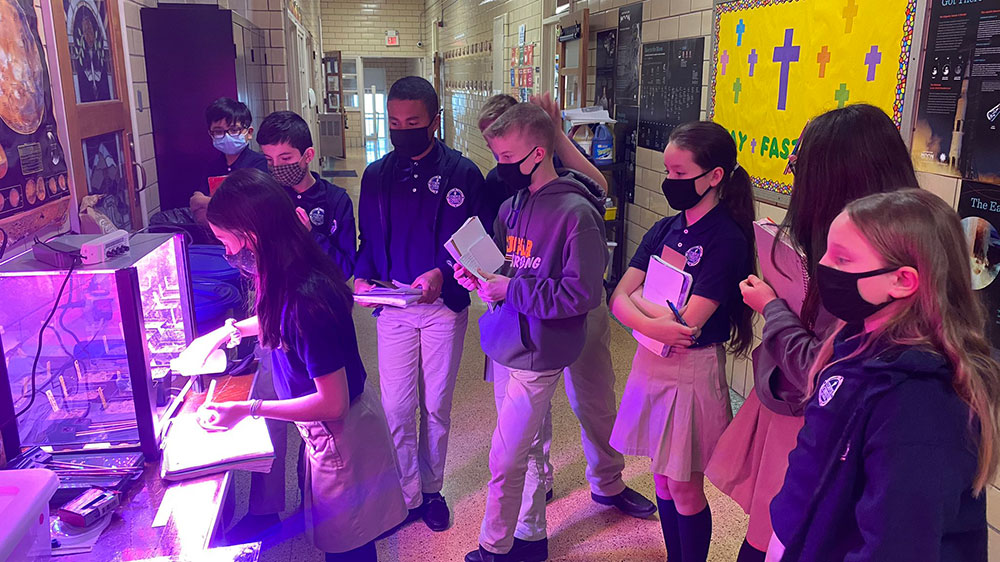 Beyond the Classroom Walls

“I don't believe education stops at these four walls,” says Falletti. The Growing Beyond Earth project has connected his students to scientists all over the country, and even internationally. “We have somebody from Brazil, who is working with us on a project he's doing,” he shares. “It's becoming a global experiment.”

Even within the confines of the school, Falletti finds ways to inspire his students. The walls of his classroom are pasted with posters of women pioneers in science, and kids are finding the mathematical and scientific concepts he teaches incredibly accessible. “I had a parent come up to me the other day,” Falletti shares, who told him: “‘My daughter has never liked science… because of you and what you're doing with these kids, you're making science fun, and not just for the boys. But especially for the girls.’”

“That is a huge thing,” Falletti says. Especially during such a challenging year, finding ways to keep students engaged and inspired is critical work. Thank you to all the teachers like James Falletti who go above and beyond to serve their students.

Learn more about the Growing Beyond Earth project and how to participate: fairchildgarden.org/science-and-education/science/growing-beyond-earth/