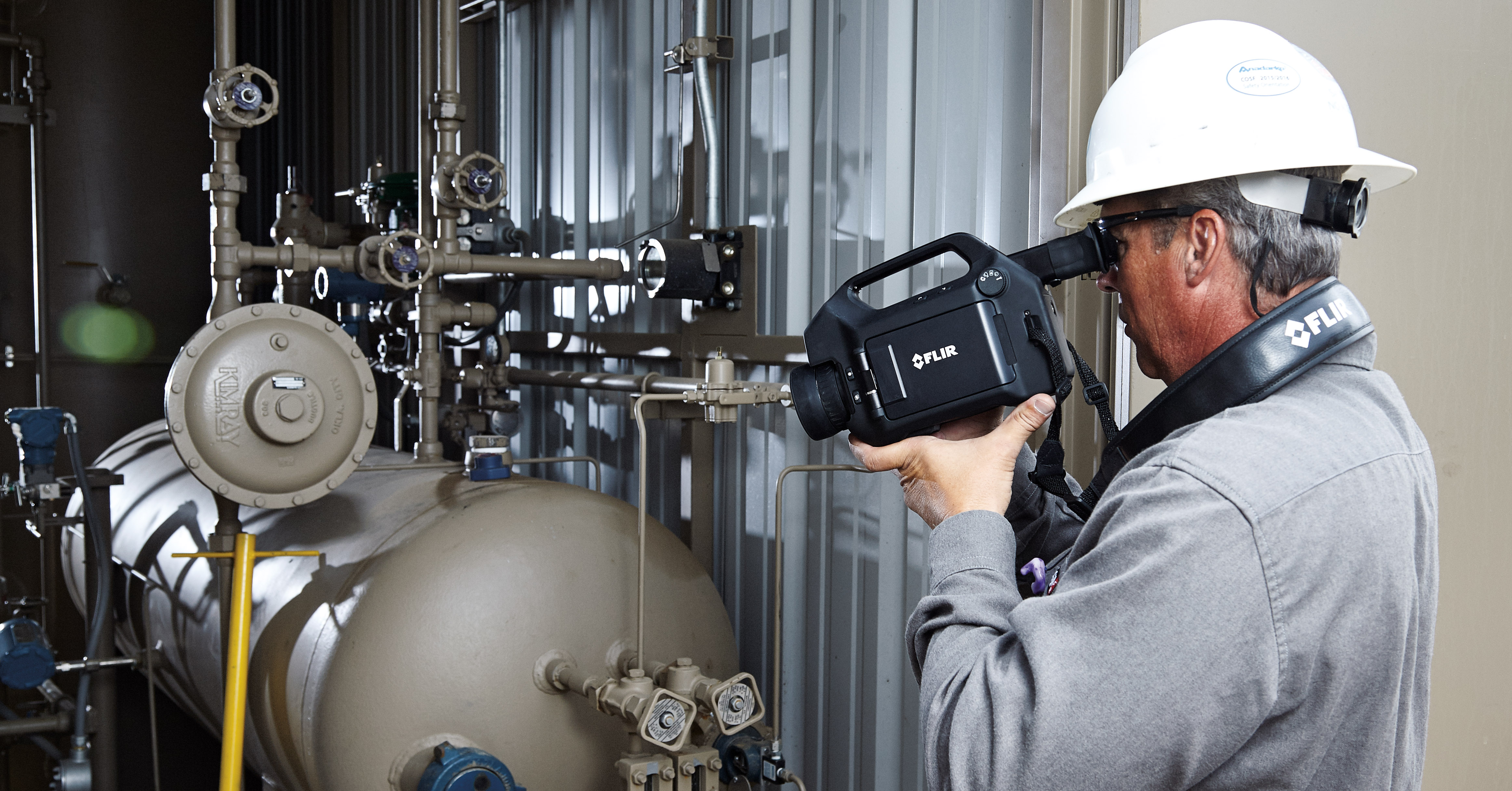 Common questions about quantitative optical gas imaging from FLIR include environmental effects on operation, regulatory concerns, and technological improvements on the horizon.

This article’s subject matter builds on the previous piece in this series, which introduces qOGI systems, discussing their functionality and advantages over competing technologies.

IS QOGI CURRENTLY USED AS A REGULATORY ENFORCEMENT TOOL?

Currently, no U.S. regulatory driver exists for qOGI methods. As industry operators strive to be more responsible stewards of the environments in which they operate, qOGI is used to conduct field studies and determine emissions for internal purposes, leaving each company free to determine the benefits of qOGI and to deploy it accordingly.

HAS THE QOGI METHOD BEEN VETTED?

QOGI is an emerging technology, in development since 2014, and it has been subjected to extensive validation testing, including blind testing with known release rates. Some of the publicly available testing results include:

NOTE: Both the oil and gas industry leader and European Concawe studies were sponsored by industry.

THE FLIR QL320 ASKS YOU TO SELECT ONE GAS TO QUANTIFY. WHAT IF THE GAS STREAM CONTAINS MULTIPLE COMPOUNDS?

It bears mention that the U.S.’ EPA-approved Method 21 shares this limitation; where qOGI shines is in how it addresses this uncertainty.

Using a flame ionization detector (FID) under Method 21, you typically calibrate the device to a pure gas, then measure process streams. The gas composition can change the FID response significantly but, generally, this error is accepted, even though it can introduce an error of 200 percent or more to Method 21. Most facilities don’t calibrate their FID to each specific process stream (a corrective action); they simply accept the concentration number (measured as a pure calibration gas). Method 21 offers no recourse to retroactively adjust the result.

HOW WILL ENVIRONMENTAL FACTORS AFFECT MY MEASUREMENTS?

While capturing video with the tripod-mounted OGI camera, QL320 users will need to ensure the highest ΔT possible. At a minimum, you’re seeking 2°C of difference in temperature between the ambient air near the gas leak and the apparent temperature of the background in the image.

Most wind conditions will not be detrimental to qOGI accuracy. If no wind is present, leaking gas may not reliably flow in one direction, leading to “pooling” of the gas. Conversely, high winds (e.g., greater than approximately 15 MPH) create challenges because the wind sweeps gas away from the release point so quickly. That said, most gas leaks will fall within an acceptable wind speed range or occur in a shielded or partially shielded location.

Wind is input into the FLIR QL320 at three levels (Calm, Normal, and High). The result is more consistent in higher wind speeds (where no gas plume pooling takes place). Accuracy is within 30 to 40 percent.

Humidity has no effect on the system’s measurement capability.

WHAT ARE THE MINIMUM AND MAXIMUM SIZE LEAKS THAT CAN BE SUCCESSFULLY QUANTIFIED WITH THE FLIR QL320?

The minimum size of a leak that can be quantified is a function of the ΔT (between ambient temperature near the gas and the background), the compound you are imaging, and the wind speed. FLIR’s QL320 system has demonstrated the ability to quantify propane leaks down to 100 scc/min and methane leaks down to 300 scc/min with a ΔT of 5°C and a moderate wind speed.

A good general rule: if you can see the leak in normal mode, the system most likely can quantify it. If you must use high-sensitivity mode to see the leak, the FLIR QL320 may struggle to quantify it accurately.

For maximum leak rates, the current model is calibrated with propane from 0.1 l/min to 30 l/min. We could safely extend this to 2x or 3x the calibrated range, or 100 cc/min up to 100 l/min (for propane). For methane, we would have correlated boundaries at 300 cc/min to 300 l/min. 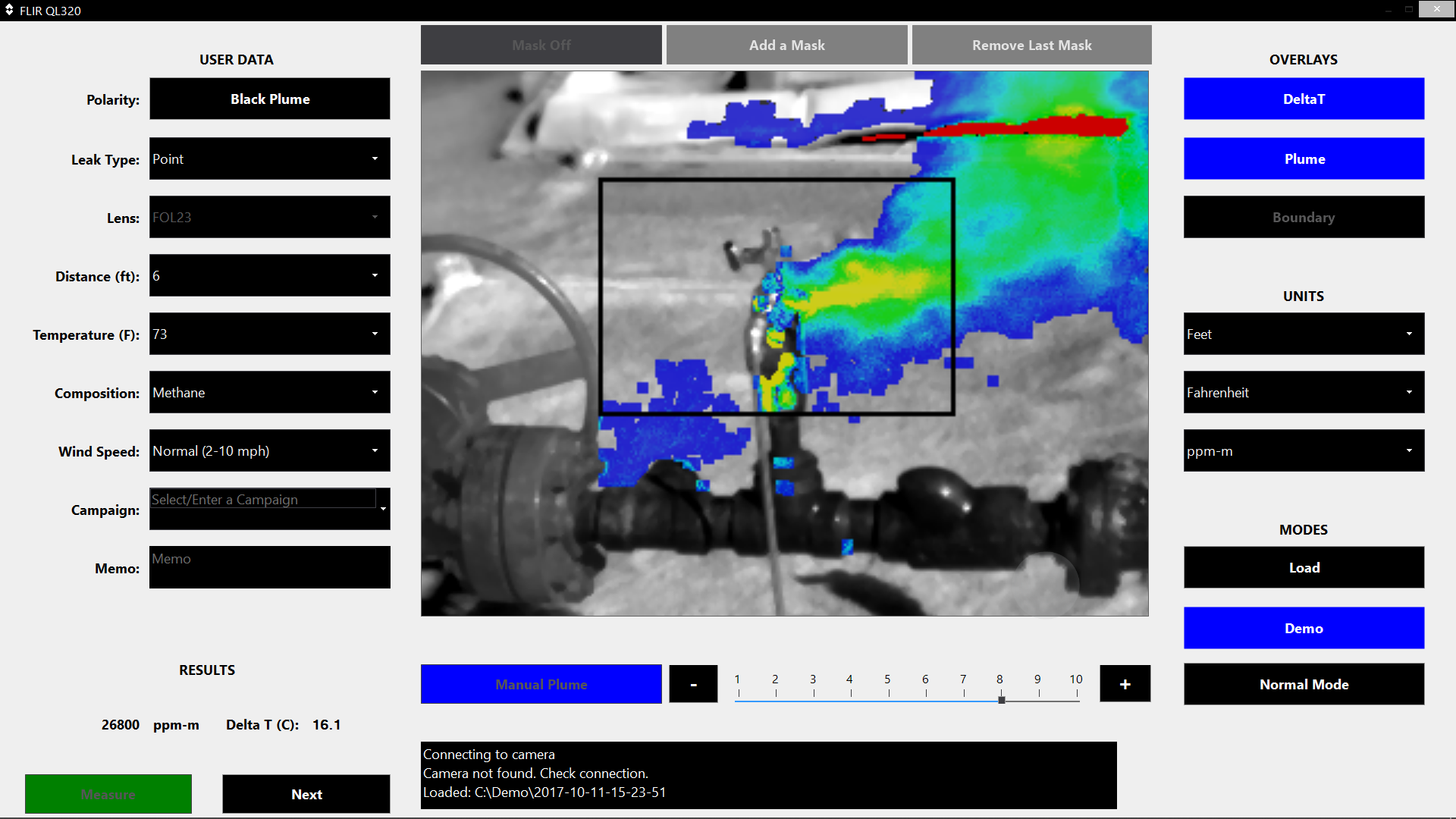 FLIR QL320 simplifies the visualization and measurement of gas emissions

WHAT IS THE MAXIMUM DISTANCE FROM THE LEAK SOURCE AT WHICH I CAN REPEATEDLY AND ACCURATELY USE THE QOGI METHOD?

The range and field of view (FOV) for the FLIR QL320 is dependent on the lens being used. These ranges are:

The overall distance will affect the repeatability and accuracy of quantification results (similar to temperature measurement with a camera), as there are fewer pixels to utilize when calculating the gas leak’s concentration length from a greater distance. Accordingly, when using the FLIR QL320 at a greater distance, you will notice the plume extraction circle is considerably smaller.

WHAT IF I AM OPERATING IN A HAZARDOUS LOCATION AND CAN’T TETHER MY CAMERA TO THE FLIR QL320 IN THE FIELD?

It remains advantageous to use the FLIR QL320 in the field, tethered directly to a camera, for several reasons:

WHAT LIMITATIONS CURRENTLY EXIST WITH THE QOGI METHOD?

The current method qOGI is designed for point releases. Large, diffuse releases, such as those from a holding pond or a large tank seal, can be more difficult to quantify with this method.

HOW IS THE QOGI METHOD BEING IMPROVED?

The optical gas imaging industry is heading toward quantification, and FLIR is leading development in this emerging field. Below are some recent improvements and new features for the FLIR QL320: 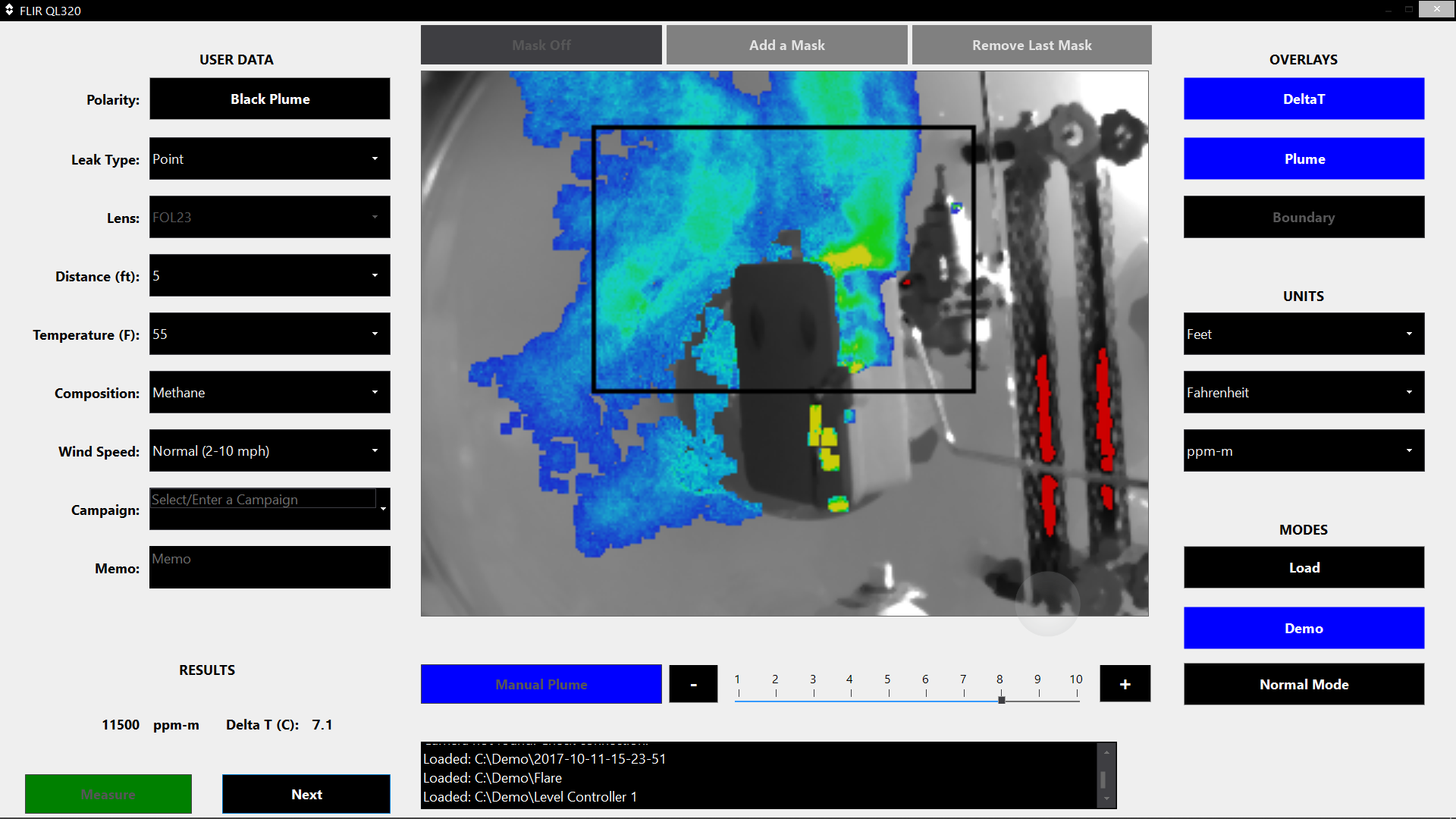 The QL320 gives concentration reading as a “concentration over pathlength” or “parts per million (ppm)” over the pathlength of one meter. This pathlength would assume the leak has a one-meter depth. In terms of X, Y, Z axis, the “meter” pathlength is the “Z” axis (depth) of the plume and NOT the “X” or “Y” (horizontal or vertical) axes. By definition, the reading would assume the leak seen is one meter in depth (from the initial leak, straight away from the camera).

A sniffer or other device that presents data in ppm takes the reading from a sample of air molecules at a single point, and therefore does not require a pathlength reading. TVA devices also are limited in that they can measure a leak only if the device is pointed directly in the leak, which is more challenging, as this technology does not visualize a gas leak.

Quantitative optical gas imaging is effective, accurate, and convenient. Its merits are growing and its technological capability continuously improving. In addition to its obvious safety benefits over alternative gas quantification methods, qOGI offers cost-effectiveness as an add-on to existing OGI cameras and positions oil and gas operators to be at the forward-thinking edge of environmental consciousness in the communities where they operate.

The FLIR QL320 platform allows qOGI both in the field and, potentially, after a scan (post-process capability) with the Q-Mode feature and the tablet combination.

Craig R O’Neill has worked for FLIR for over 17 years and been actively involved in the OGI market since the introduction of commercial Optical Gas Imagers in June 2005. Currently, he has global responsibility for the Optical Gas Imaging line of business and the strategy for FLIR’s solutions in the oil and gas industry. In this role, he is the linking piece between customers, industry stakeholders, strategic partners and many vertically integrated aspects of the FLIR Instruments division including sales, marketing, engineering and product management. His goal is to ensure FLIR’s alignment to provide sensing solutions that meet the needs of the oil and gas industry.

Founded in 1978 and headquartered in Wilsonville, Oregon, FLIR Systems is a world-leading maker of sensor systems that enhance perception and heighten awareness, helping to save lives, improve productivity, and protect the environment. Through its nearly 3,500 employees, FLIR’s vision is to be “The World’s Sixth Sense” by leveraging thermal imaging and adjacent technologies to provide innovative, intelligent solutions for security and surveillance, environmental and condition monitoring, outdoor recreation, machine vision, navigation, and advanced threat detection. For more information, please visit www.flir.com and follow @flir.