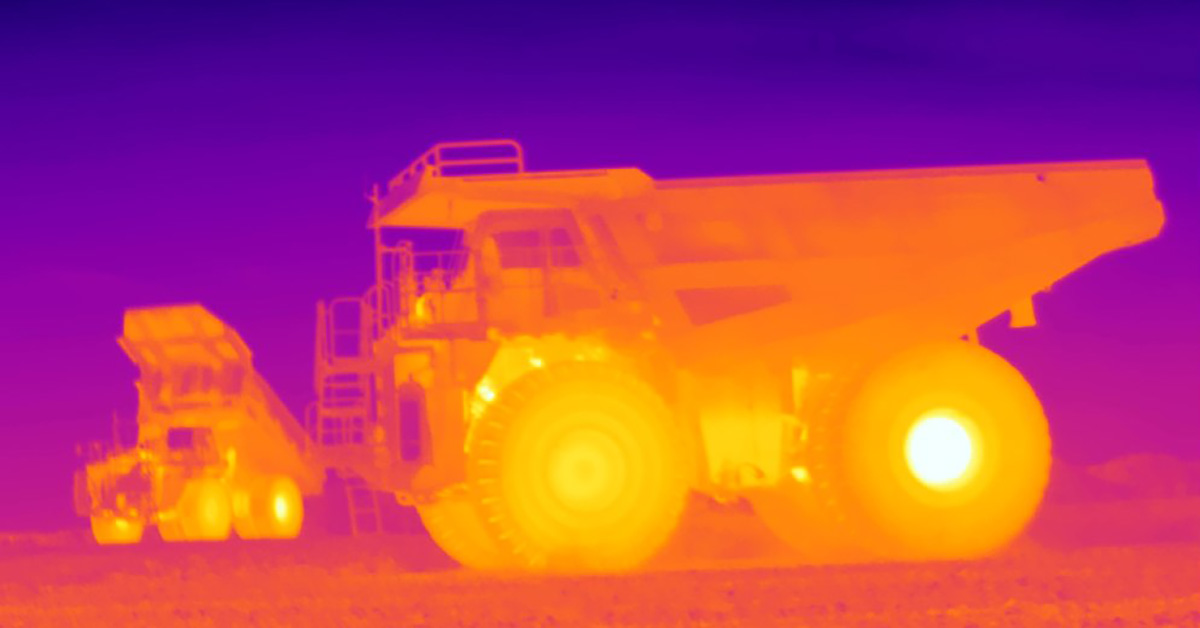 Pitcrew AI is a new system leveraging FLIR thermal imaging and AI technology to change the way trucking and mining vehicles are inspected. Using an AI algorithm trained on a library of thermal images, the system can spot problems in their early stages, before equipment is destroyed or vehicles cause deadly accidents on the road. 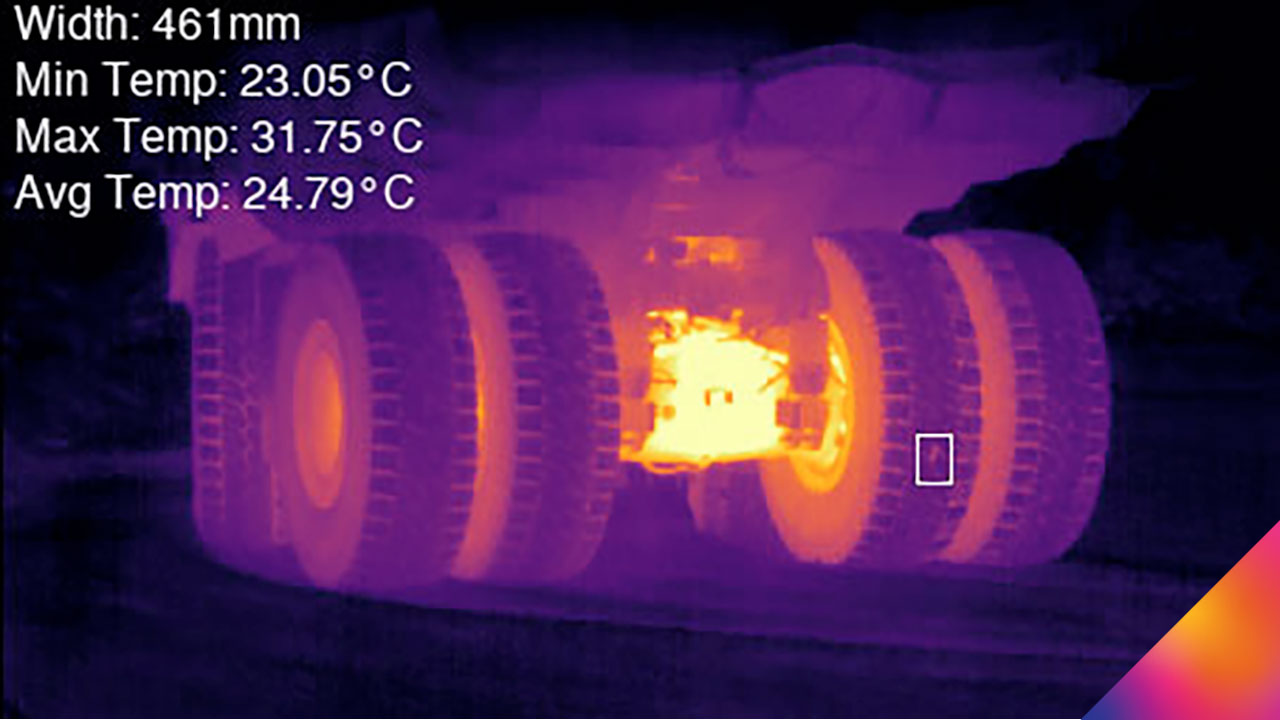 The system is built by Industrial Monitoring & Control (IMC), who developed the system to automate inspections of mining truck tires. This is critical to maintaining uptime for mining trucks, as even minor damage to a large mine tyre—such as a simple rock-cut—can result in complete tyre failure if not detected. OTR tyre failures pose a major safety and financial risk to mine operations. In a worst-case failure, a tyre fire can occur. The more likely outcome—if tyre damage is not identified—is that there is unplanned downtime for tyre changes plus the potential cost of $50,000 AUD for the replacement tyre. Not having any insight into active tyre damage on-site also makes forward planning of tyre stock difficult and can make change times longer.

When a small tyre injury is allowed time to grow it can develop into a large heat separation. If a hot tyre event is triggered it can remove a vehicle from operation for more than 24 hours, as it must be isolated in an exclusion zone. This can be a significant disruption to site operations. However, an even worse scenario is if a hot tyre is not detected and progresses to a tyre fire. This can be catastrophic and destroy expensive critical equipment. Even disregarding the safety and operational issues, tyres are a significant cost centre for mining operations, extending tyre life results in significant savings to site operating expenses (OPEX).

Tim Snell, Director at IMC, explains the value of developing a new and improved inspection system. “We've developed a whole bunch of different solutions over the years,” says Snell, “and this is one of those problems that has been known on large mining and quarry sites, but for many years there hasn't been a good solution for it.”

Current methods for detecting tyre damage include manual visual inspections that are conducted at regular intervals, such as shift changes. Often the smell of burning rubber is the first indication of a hot tyre. Autonomous haul truck operations reduce the likelihood of early detection, as less frequent inspections occur. There are several examples of major tyre fires on autonomous haul trucks.

There has been enormous investment in autonomous fleet driving technology. But human drivers also perform many tasks in the vehicle beyond driving. For example, smelling burning rubber, hearing a rattle or a squeak from the engine bay, feeling an abnormal vibration through the seat. To date nowhere near the same level of investment has been made into replacing these secondary driver functions. To maximise the performance of autonomous fleets and extract the full financial benefits of the investment in them, mine site operators need to embrace autonomous inspection and monitoring technologies. 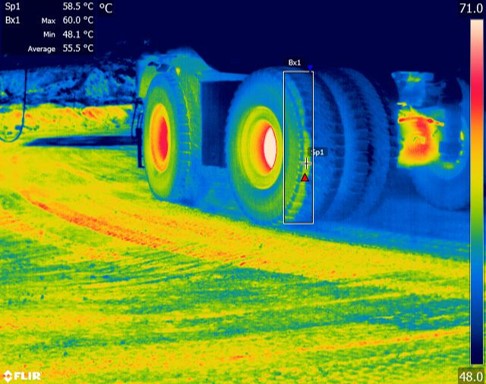 IMC had known for a while that tyre separations could be detected using hand-held thermal imagers. Inspectors can use the cameras to detect hot spots caused by the separated materials of the tire rubbing against each other and creating friction. These hot spots are visible even if tires are caked in mud—the usual case with mining trucks—whereas a visual inspection for delamination requires the tire to be washed off in order to detect traces of a puncture in the top layer of the tire. “It can be detected if you were doing a detailed visual inspection,” Snell says, “but in reality, getting the inspections done in real time without downtime, this is the only effective technology that I'm aware of.”

Taking a step beyond hand-held imagers, the Pitcrew AI system is supplied as a rapid-deployment, self-contained, solar-powered skid that can be installed at the side of a haul road within a few hours. Controlled remotely by Pitcrew AI engineers, the system includes a military-grade thermal imaging camera and an advanced artificial intelligence machine vision processor. There are no changes to site operations required. The system can inspect every machine without requiring the vehicle to stop. Every vehicle that passes the system is inspected, 24/7-365 without any human intervention.

Pitcrew AI has the ability to detect small tyre injuries, such as rock drill, missing lug, or rock incisions. Each individual damage event can be tracked via an individual damage ID. After the initial detection, the tyre can be inspected and if it is repairable then the tyre can be removed and repaired, delivering savings on the site tyre spend. Tyre repair is much kinder to the environment than the new equivalent and can play a major role in helping mines achieve sustainability targets.

If the tyre is damaged beyond repair, then, if it is safe to operate the vehicle, the tyre can be returned to service. In the case of damage like a rock-cut, the separation can be tracked on each pass of the Pitcrew AI system and the growth monitored. Machine learning models are used to project the damage growth and predict when a tyre change is necessary. This allows vehicle downtime to be planned well in advance, minimising unplanned tyre changes and allows tyre stock to be managed efficiently.

Similarly, by predicting the trajectory of tyre damage many of the risks associated with hot-tyre events and tyre fires can be avoided. However, hot tyre events can still occur and the Pitcrew AI system can detect hot tyres and immediately alert personnel via email, SMS or multiple other communication options. This allows a vehicle to be isolated as quickly as possible improving mine safety. The system offers the additional benefit of offering a remotely controlled thermographic inspection system that management can use to assess a vehicle remotely, improving visibility and intelligence during a mine safety event. 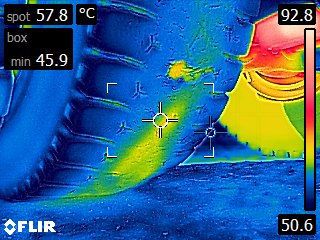 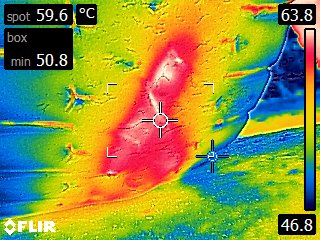 When it came to automating inspections, IMC decided to use a FLIR A615 Thermal Machine Vision camera and trained an AI model to identify the early stages of separation as they appeared in thermal.

While building up a training library was a monumental task—training an AI takes thousands of images—Snell and the rest of his team were surprised at how well the project came together. “I think the first time we ran the system live on a site we started getting alerts out of it straight away, it had actually done everything it was supposed to,” Snell says. “Nothing ever works that well straight out of the box.”  Of course, behind that success was a decade of legacy coding work done by IMC, which has been distributing and integrating FLIR cameras like the A615 for about 10 years. 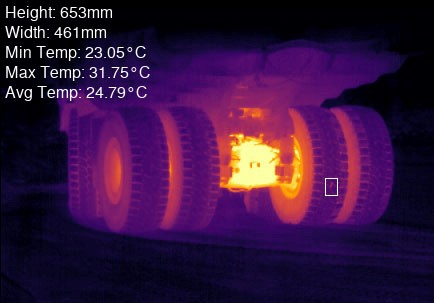 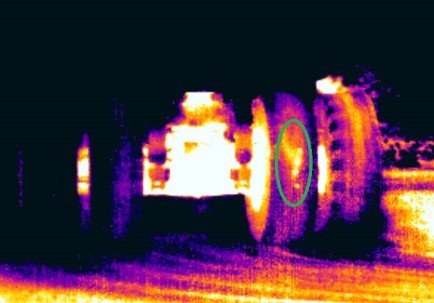 Pitcrew AI can be used to check hundreds of vehicles a day for tire separation. 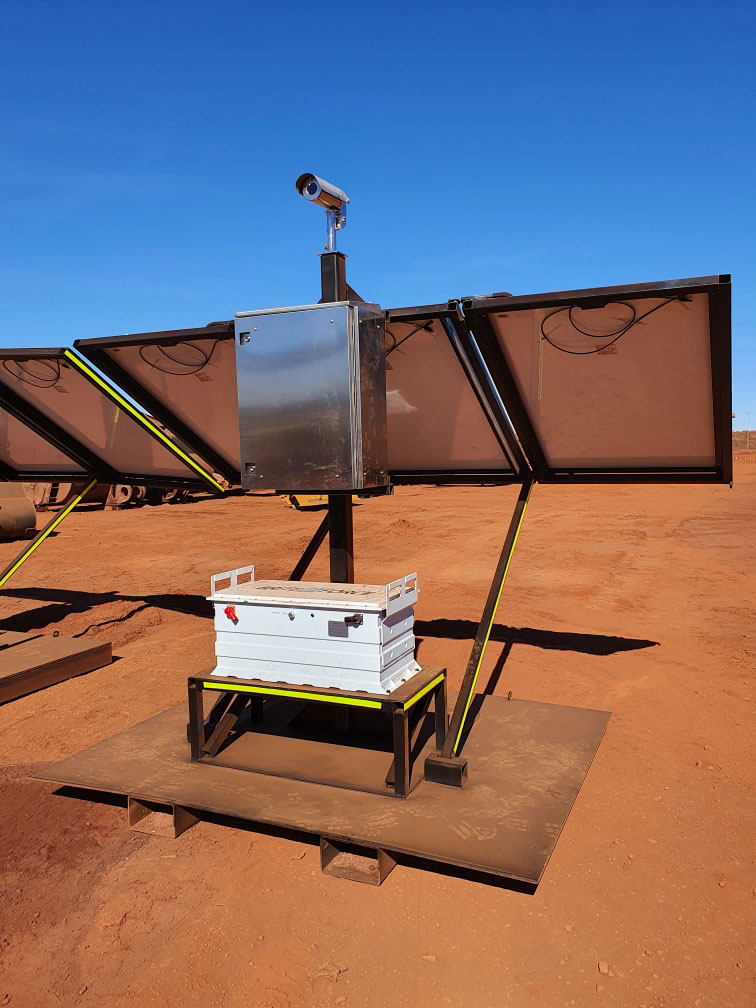 Pitcrew AI system with FLIR camera in the field.

It is worth noting that on most sites that operate a Pitcrew AI system, a second system is typically installed at the entry to the tyre workshop. This system acts as an additional safety control, to alert personnel before any potential hot tyre or dangerously damaged tyre can enter the workshop.

One concern the Pitcrew team typically hears is “We’ve got a TPMS with tyre temperature sensors already, we don’t need this type of system”. The Pitcrew AI system is actually a perfect complementary technology to existing TPMS. A recent example was when hot oil from a haul truck turbo was ejected onto a tyre, causing a small tyre fire to start on the outer tread of the tyre. The internal TPMS registered a temperature rise on the burning tyre of less than two degrees above the adjacent tyre, as the thermal mass and volume of the tyre insulated the sensor from the fire on the surface layer. The Pitcrew AI system can detect surface layer thermal anomalies immediately. This information can be passed directly to TPMS platforms or tyre management software packages that are already in place.

The Pitcrew AI system provides a user-friendly web dashboard, accessible from anywhere with an internet connection. The interface is optimised for mobile devices and users with poor network connections, as this is the most common method of access by our site users. Detailed inspection history and automated reports are available. Insights into mine operations can be seen in the data and mine condition monitoring is possible. For example, if a common damage type on a common tyre position is detected it may identify that upkeep of haul roads, benches or working areas is required. This ensures tyre and truck component damage is minimised and productivity is enhanced.

In the modern, connected world a system is only effective if it can be tightly integrated with other systems to form a bespoke, site-specific workflow. Pitcrew AI offers a flexible RESTful API (Open API, Swagger) for integration with 3rd party systems. This can be used for automatically generating work orders or job tickets for tyre inspection or change out, or for bi-directional communication with fleet or mine management software platforms. 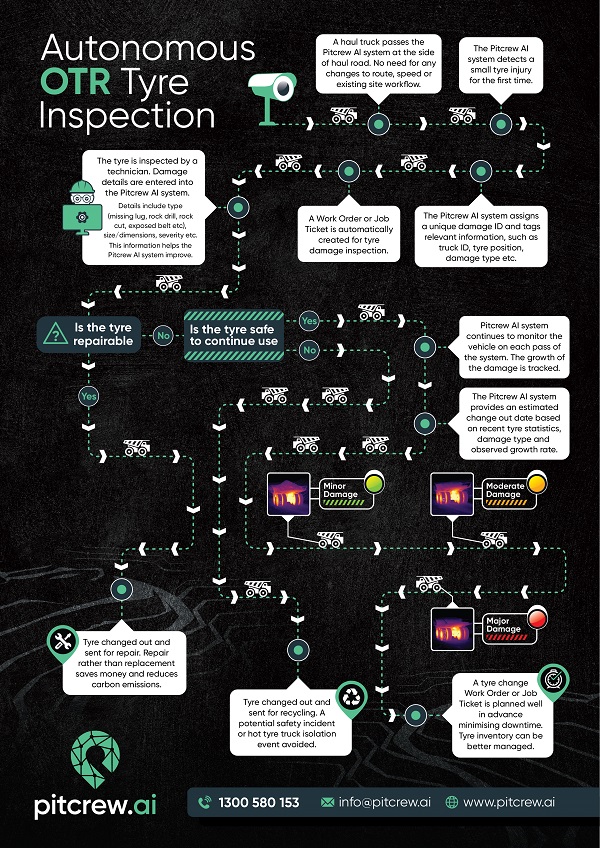 An example of Pitcrew AI workflow 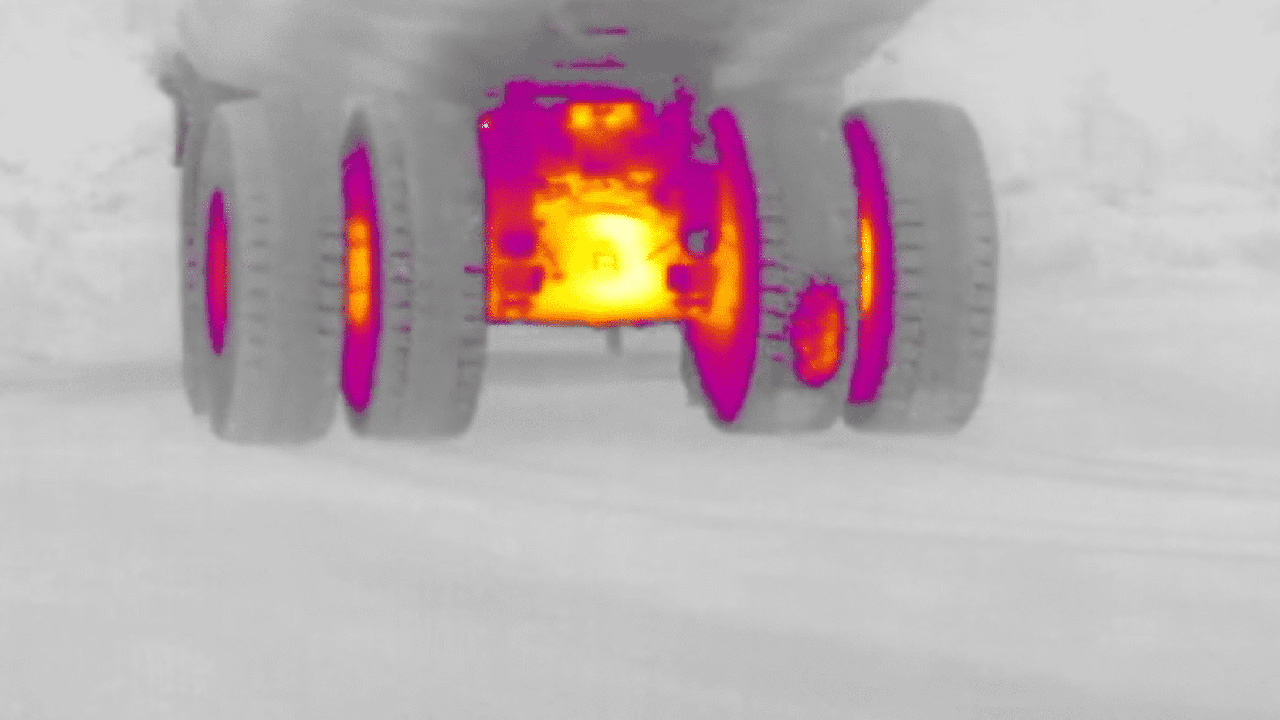 The underlying Pitcrew AI system was originally developed for roadgoing heavy vehicles, with a similar FLIR camera system already being used as a tool to automatically detect brake issues on cross-country trucks. This system provides authorities with compliance information and fleet operators with predictive maintenance data.

While tyres may be the frequent issue for mining haul trucks, brake issues are the problem that cross-country truckers usually run into. Autonomous thermal inspection systems at heavy-vehicle inspection stations and other stops along the road can alert road authorities to the early indications of brake failure and allow for targeted rather than random inspections. In Australia, brake failures on trucks are implicated as a contributing factor in nearly 40 percent of all truck accidents, making it a critical issue to address.

The automated solution can be used to check hundreds of vehicles a day at a mining site or an offramp. “There's no limitation,” Snell says. “You can process one every two seconds.”

Snell is hopeful that Pitcrew will become a widespread solution. “The idea is it will become a standard across Australia,” he says, and sees a global potential as well. Though the process of working with local road authorities to get the systems installed has been slow, over the past 5 years the company has made major progress. So far, they are operating out of Australia, Papua New Guinea, New Zealand, and even have systems installed as far away as South Africa. “There's nothing that would hold us back from pushing to anywhere in the world I don't think.”

Check out the Pitcrew website, and learn more about FLIR automotive and industrial solutions.

Summary of the system:

- A solution for the mining industry in the Industry 4.0 era, Pitcrew AI is an IIoT solution that leverages emerging technology including thermal imaging, artificial intelligence and machine learning

- Requires no changes to site workflow; the system sits at the side of the haul road and operates 24/7-365 without any human intervention

- Does not disrupt or impact production during installation

- Operates as a standalone system with no integration required; integration with 3rd party systems is simple when desired

- System can be trialled; there are no lock-in contracts or commercial risk