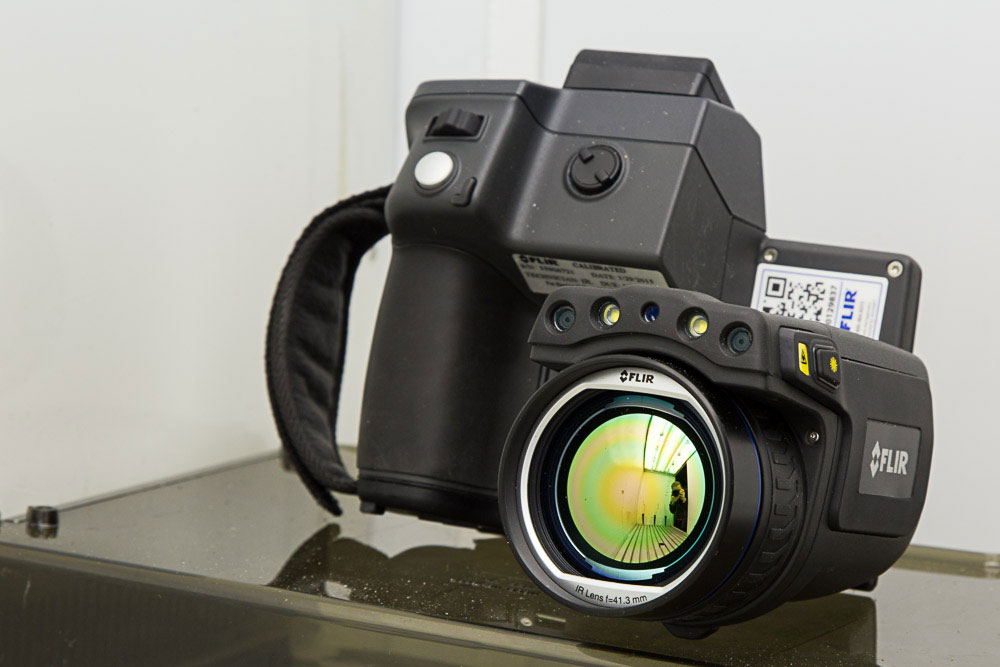 Thermal imaging is a great help in the study of insects. Researchers use it in order to discover how several species of insects coexist on a host plant. At Penn State University, a FLIR T650sc has provided valuable thermal information in an experiment with coexisting insect species on wheat plants.

The departments of Entomology and Ecology at Penn State University have made it their mission to conduct outstanding research on insects that will improve human health, quality of life, and the sustainability of our food and ecosystems. Entomology is indeed an interdisciplinary life science that contributes much to our understanding of life, our environment, and the well-being of our society. Insects significantly affect human civilization, whether the impact is positive, such as pollination of our food plants, or negative, such as competition with our food supply or carriers of major human diseases.

Research in the Departments of Entomology and Ecology addresses diverse questions and uses a wide variety of experimental approaches and methodologies, including thermal imaging, to discover more about the lives of insects. Temperature is one of the most important environmental factors affecting the growth and development of insects. Microclimatic conditions on the host plant - the plant upon which the insect lodges and subsists – are especially important for herbivorous insects; thermal gradients often govern the distribution of insects on their host plant.

Entomology graduate student at Penn State, Mitzy Porras, studies these microclimates and she has a special interest in the coexistence of insects on host plants. “How do competitor species coexist in a common environment? The thermal gradient of a plant can give us insights into how such insects live together – the mechanisms of their coexistence – and about the typical distribution of these insects on a plant.”

An experiment was set up to identify the thermal gradient on wheat (Triticum aestivum L.). “We wanted to accurately measure the temperature of wheat plants, both on the stem and on the apical parts of the plant,” says Mitzy Porras. “However, the physical traits of the wheat plant – the narrow leaves and stem – definitely made it a challenge to accurately and reliably determine the plant’s temperature."

“For this experiment, we decided to use a thermal imaging camera, because this technology allows us to accurately characterize the thermal heterogeneity on plants,” says Mitzy Porras. “It can assess temperature on both the stem and the apical parts of the plant at the same time, and you have a total overview of the thermal gradient in one image. The narrow leaves and stem also made it difficult to distinguish the plant’s temperature from the background temperature. But we were able to overcome this limitation by using an appropriate lens on the thermal camera. This way, we were able to assess the temperature in three points across the wheat leaf.”

“Another huge benefit of thermal imaging is that this is a non-destructive method, which means that you don’t influence the temperature of the plant by measuring it.” 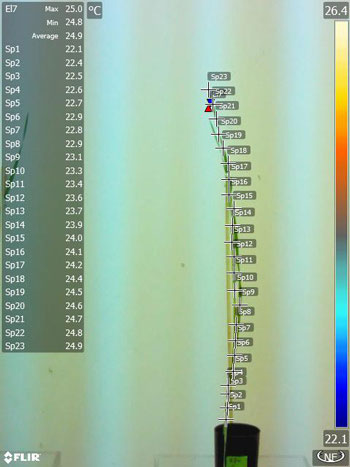 Thermal gradient characterization on individual plants: the temperature varies 2°C to 4 °C, according to the relative humidity and stress at which the plant is exposed. Thermal gradient identification using FLIR TOOLS.

The thermographic measurements were taken with a FLIR T650sc thermal imaging camera with a 15mm lens and with an emissivity value of 0.90. The wheat plant was located in a growth chamber, with controlled humidity, light, temperature, and wind speed, which ensured a homogenous airflow and avoided fluctuations. The FLIR camera was exposed to the environmental conditions in the incubator for about two hours before the experiment, and the plants were acclimatized 24 hours before pictures were taken. A set of 10 pictures were taken per plant, with one meter distance between the plants and the camera. The thermal gradient was assessed on plants under simulated conditions of field density and for individual plants.

The FLIR T650sc is a thermal research camera with 640 x 480 pixel resolution and small spot size, delivering precise results and reliable temperature measurement accuracy. It has a tiltable IR unit which enables users to conduct their experiments fast and in a comfortable position. The high quality LCD touch screen presents sharp and bright images and makes it easier to change the settings and interact with the menu. The T650sc also features FLIR’s proprietary MSX® and UltraMaxTM image enhancement functionalities.

“The FLIR T650sc allowed us to assess the temperature on the wheat stem and apical parts very accurately and it showed us the thermal gradient in great detail, which was the whole objective of this experiment,” says Mitzy Porras. “Furthermore, the camera is very easy to operate. You can choose to use the FLIR unit out in the field or work with it in the lab, which makes it very flexible. The camera can be used in various environments and it proved to acclimatize very well in the growth chamber.”