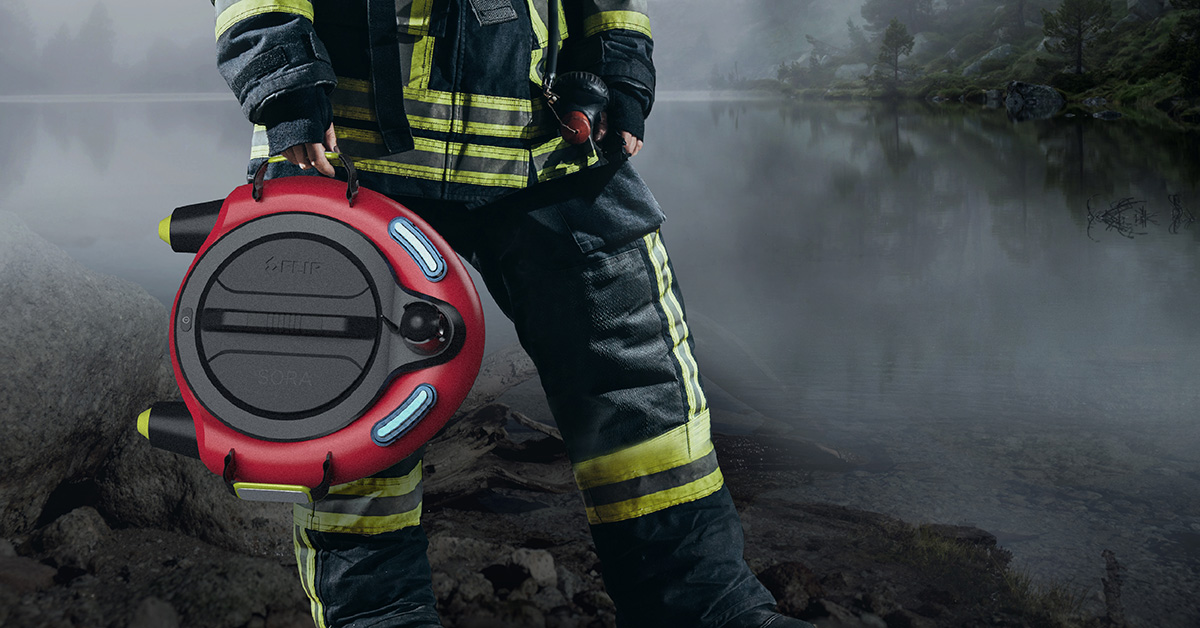 First responders know that the first few minutes are critical when responding to a drowning incident—the longer the victim is in the water, the less chance there is of recovering them alive. That’s why Jenny Johansson, design student at the Umea Institute of Design in Sweden, came up with SORA, or Search Optimization and Rescue Assistance: a device that would incorporate both sonar and thermal imaging to begin the search for drowning victims as soon as responders reach the scene. 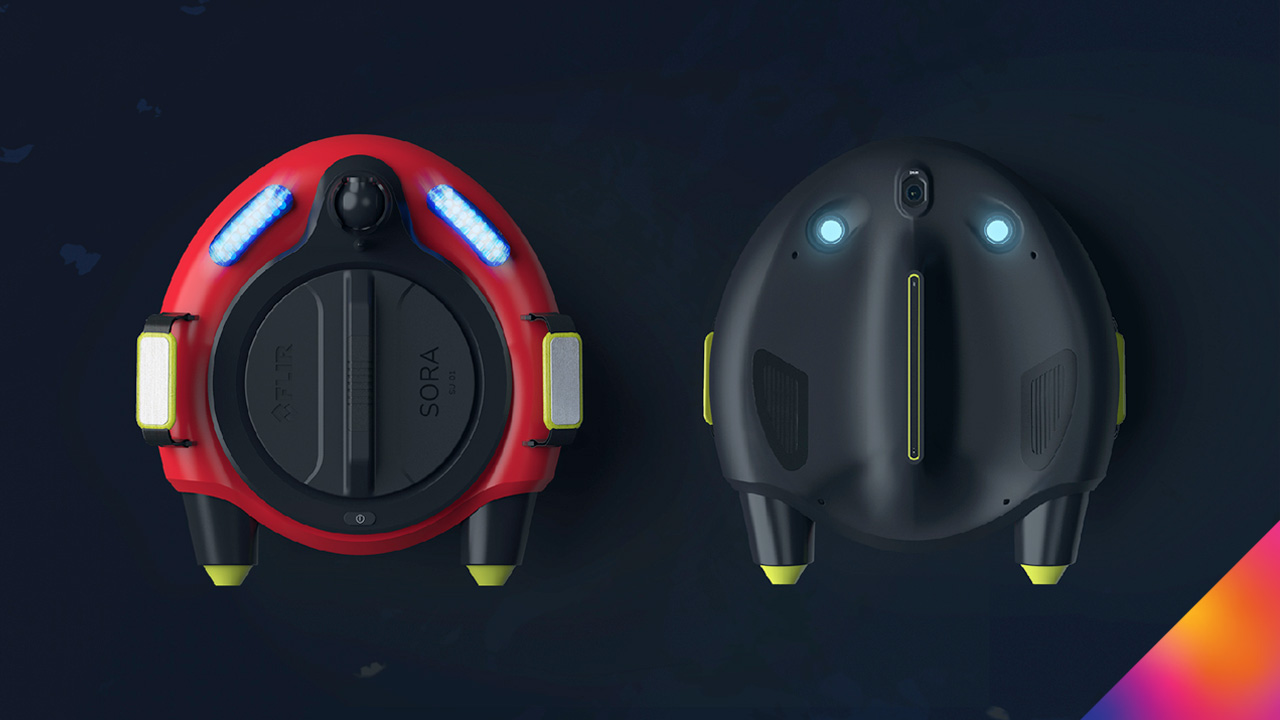 While there have been extraordinary cases of people surviving for up to two hours in the water, experts say that after about 10 minutes of submersion the chances of survival during a drowning incident are extremely low. As is the case in many countries, in Sweden it’s the firefighters who are usually first on the scene during a drowning incident. However, firefighters aren’t always fully equipped for water search and rescue. “They're very, very limited, especially when it comes to diving,” says Johansson. “I could see that there's a need for more efficient searching solutions for them, especially during the first critical minutes.” 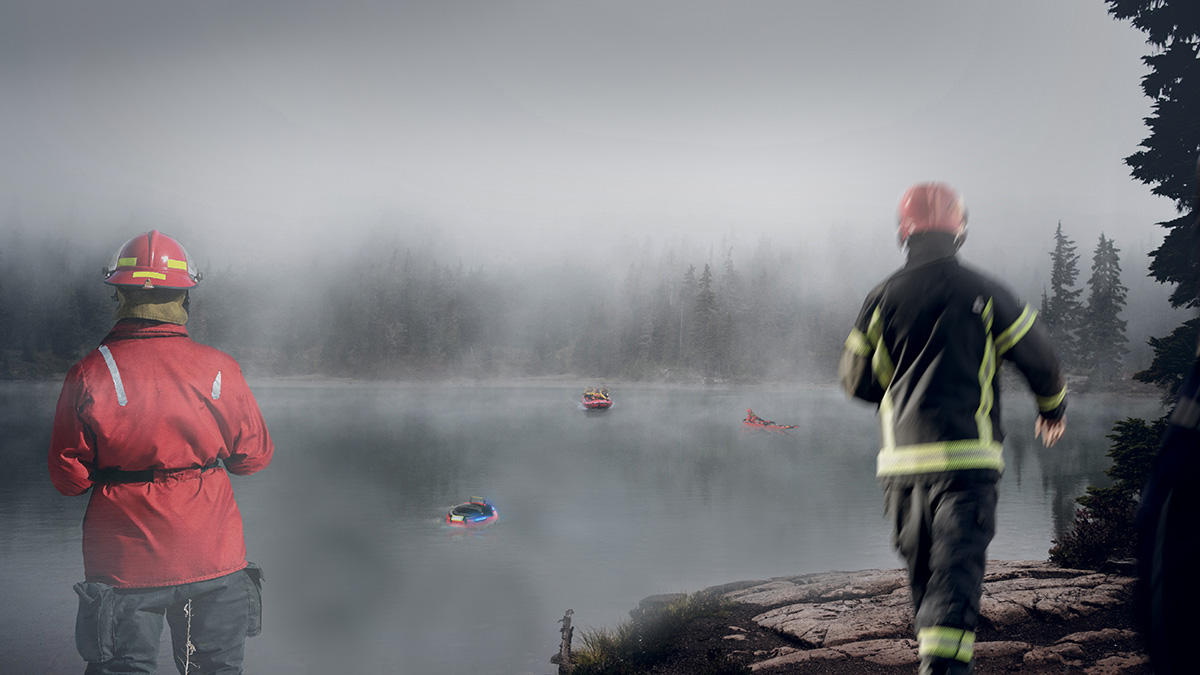 Most drowning incidents in Sweden happen in lakes, rivers, or near the ocean shore: all areas where firefighters are usually the first on site. Searching for the victim both underwater and above the surface often requires large search areas, especially if there are currents that might have dragged the person away. Because of this, Johansson decided to focus her design on a device that would be useful to firefighters in these situations.

“I saw this need, that can I design something that the firefighters that are first on site can use during those first critical minutes when you actually have time to save someone,” says Johansson. “That's where this idea started.” 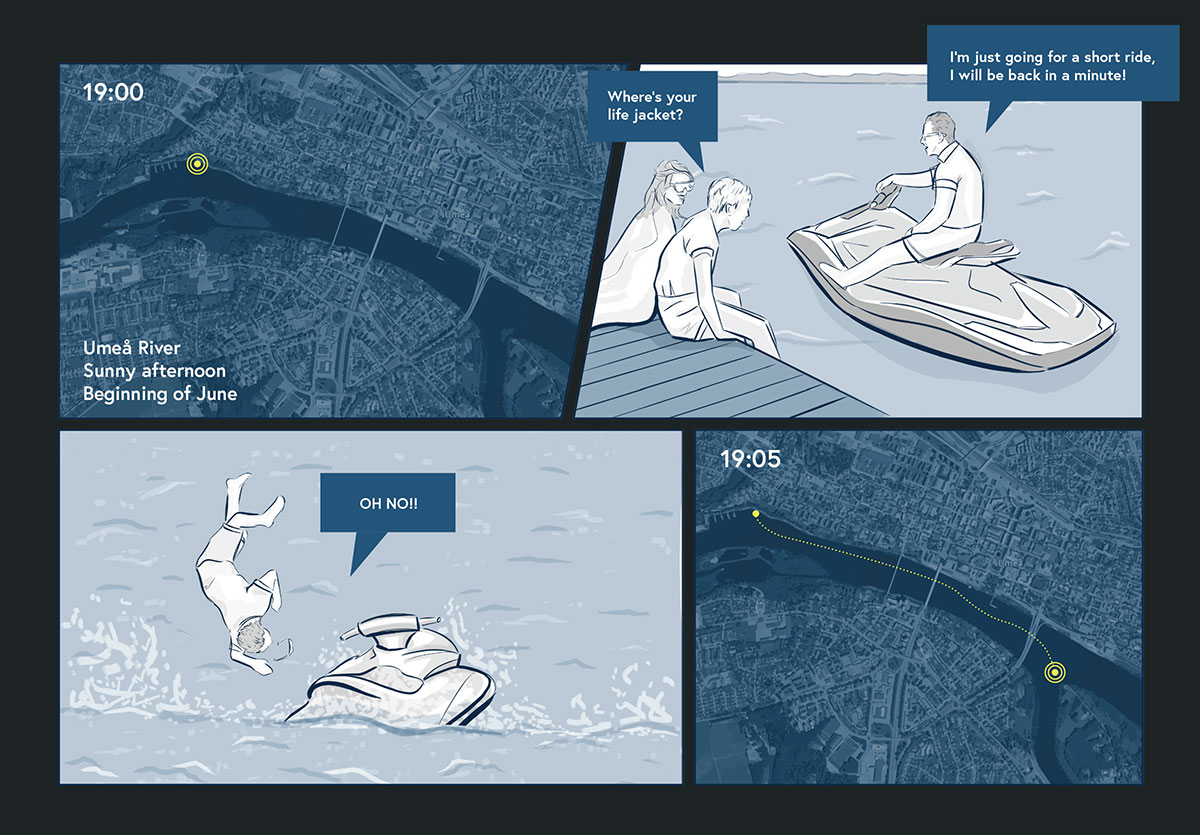 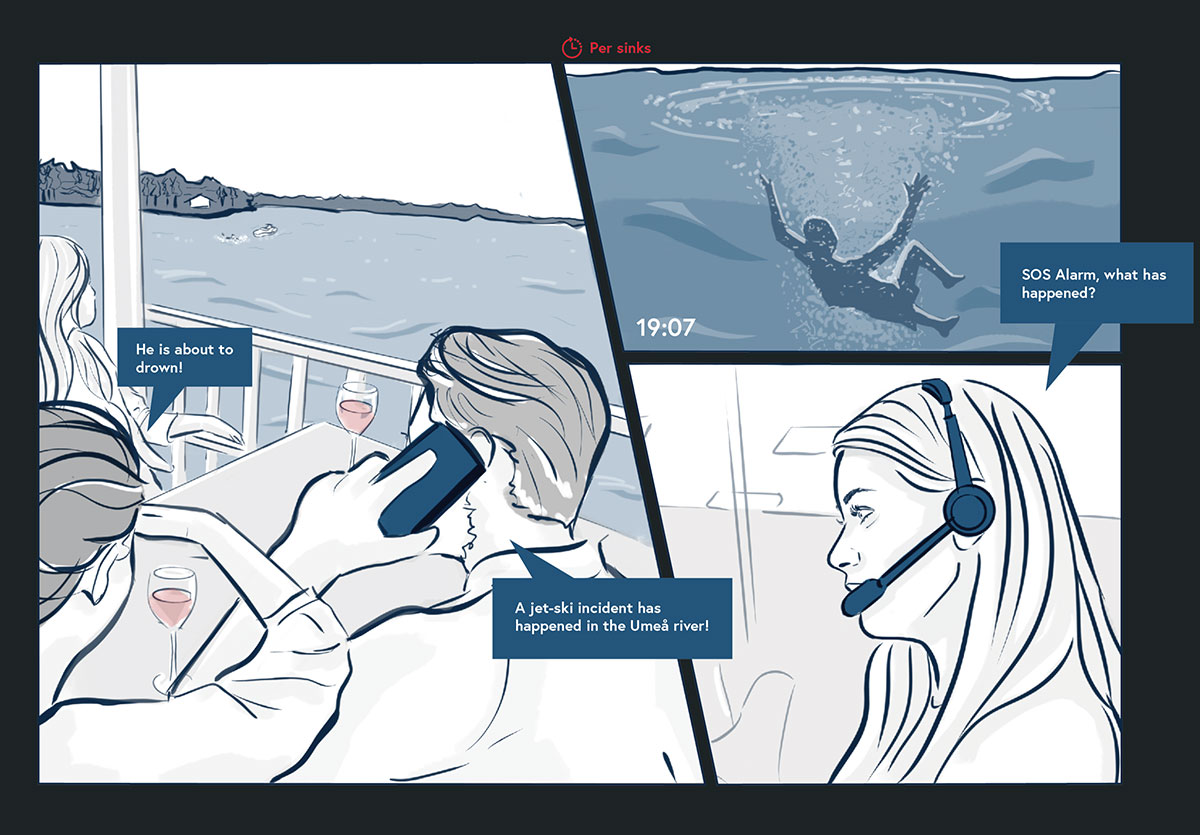 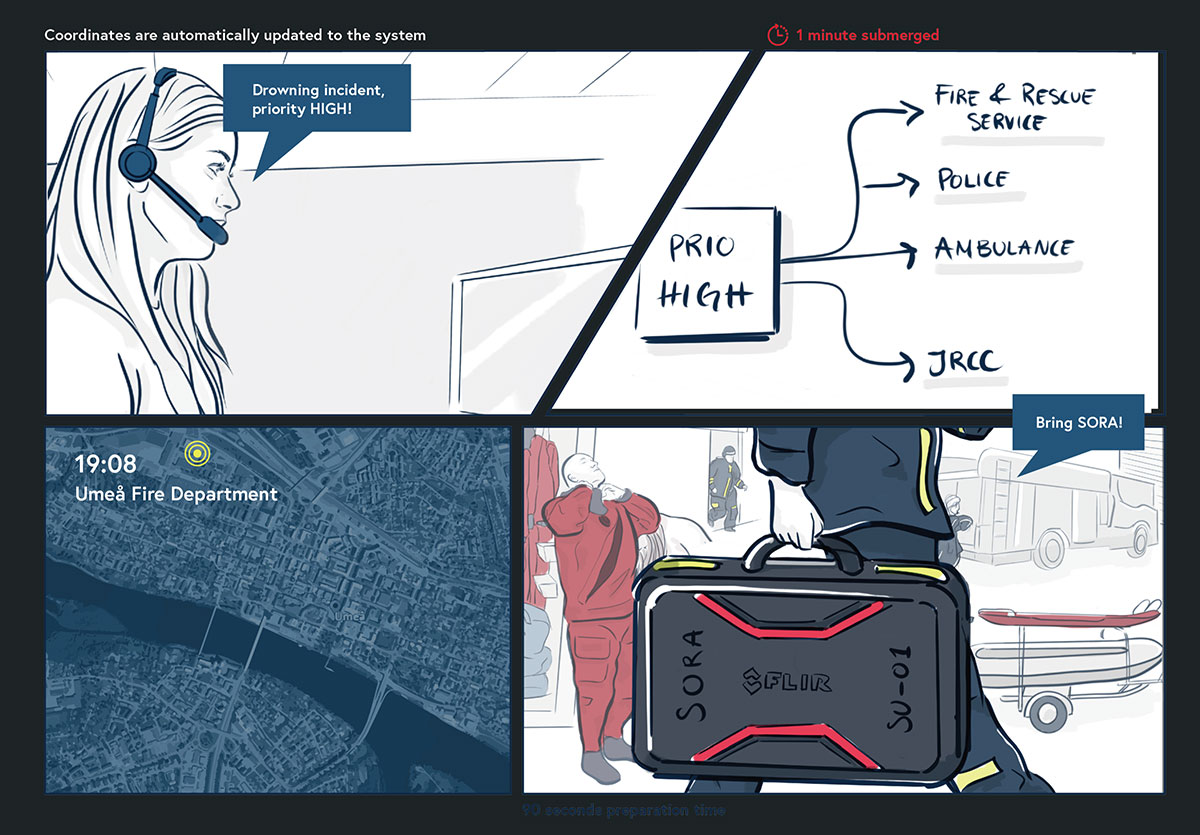 With information from firefighters and rescue experts, Johansson sketched out common drowning scenarios both to better understand the search and rescue procedures after a drowning incident, and to communicate her concept for SORA while working remotely during quarantine.

Breaking the Ice and Getting Her Feet Wet

Johansson started on the 20-week design project in January of 2021, and presented the project in May. “I took a very holistic and user-centered approach, as I interviewed a lot of people and also did some field trips with different rescue professionals, experts, and organizations in Sweden,” explains Johansson about the process. Some of those field trips included getting out on the ice herself to better understand the experience of both a rescue professional as well as a drowning victim.

“I did an experience where I walked on the ice until it broke,” she relates. “This cannot be compared to a real situation, but it helped me to better understand the stress and maybe the panic.” 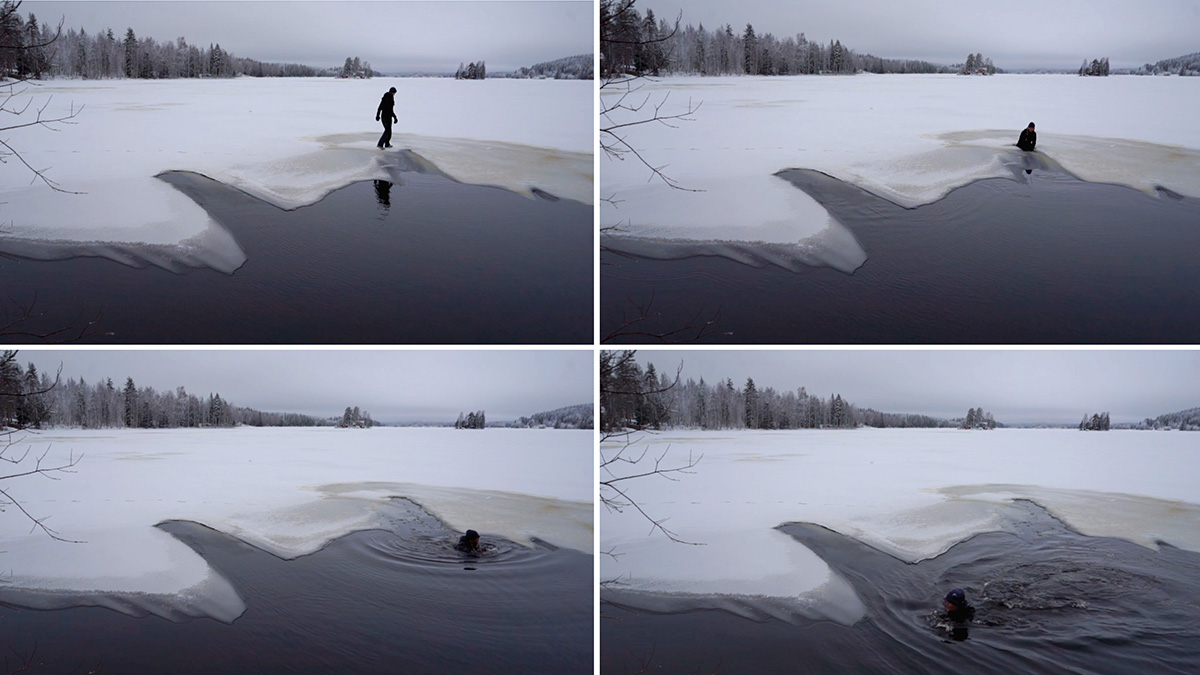 Johansson simulated experiencing a drowning incident by walking on ice in a lake until she fell through.

Through interviews and trying out the equipment for herself, Johansson learned about the key challenges facing rescue professionals. One challenge is poor visibility. “In Sweden, all waters are very dark and cloudy, so that makes it incredibly challenging to search for someone,” says Johansson. “It depends on a lot of luck and circumstance.”

Most firefighters rely on snorkels and goggles to search, and may have boats equipped with sonar. They can perform free-diving if they think they’ve found the victim, but as most are not professional rescue divers the process is both energy-intensive and risky. “Only 19 of Sweden's 290 municipalities have access to rescue divers,” explains Johansson. “It puts the regular firefighters in a quite tricky situation when they are first on site, because other diving resources often take time to get recruited. So unfortunately, they then come in too late in the process.” 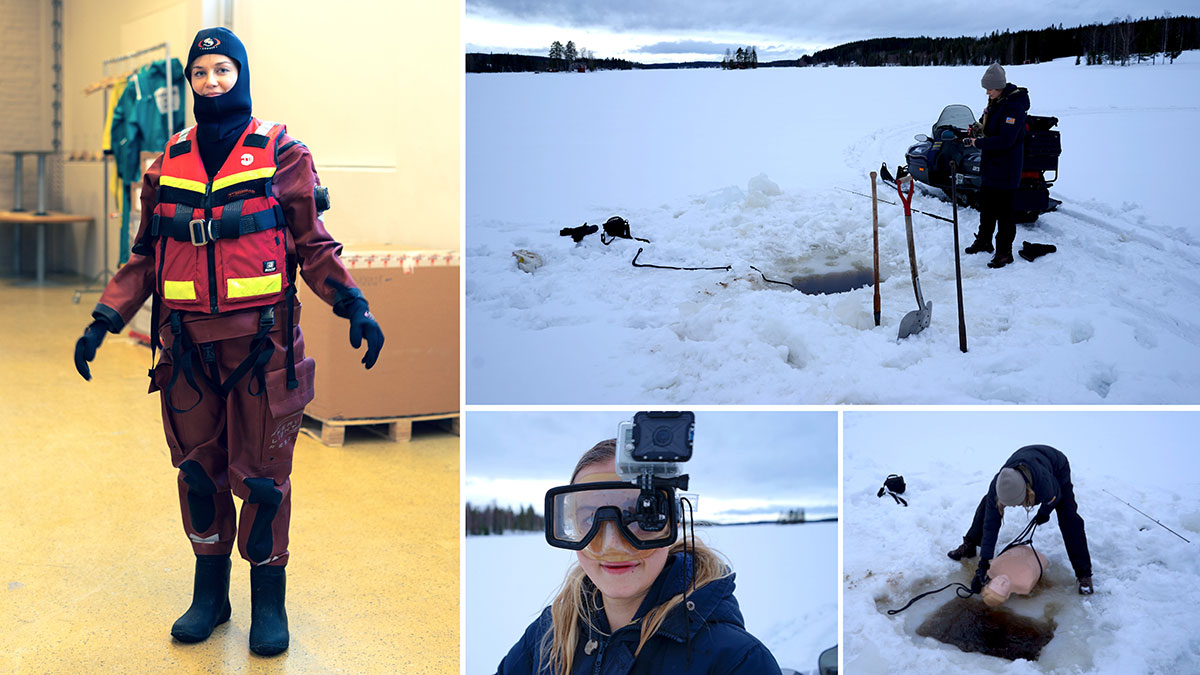 Johansson explored different existing technologies and methods for rescuing victims to find the most effective solutions.

Searching Above and Below with Thermal and Sonar

Johansson experimented with different technologies to find the best solution to locate drowning victims quickly, finding that sonar was the most efficient underwater and thermal imaging was the most effective above the surface, even in bad weather or if the person is wearing dark clothing. “I started to think, what if we could combine those technologies?” Johansson says. “The core idea is that a SORA unit will be searching both above and underwater simultaneously.” 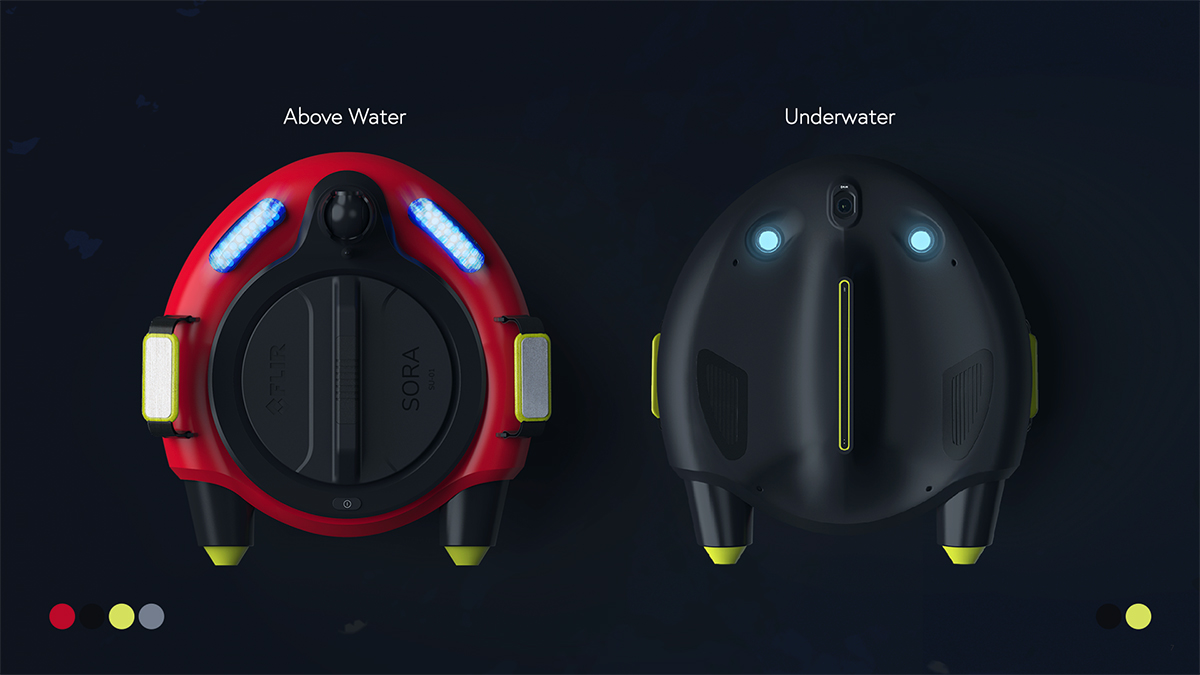 The top and bottom of the SORA design concept—the top of the search unit is equipped with a thermal camera, and the bottom with sonar. Both technologies work in poor visibility conditions.

Many firefighting units already have access to sonar and thermal imaging cameras (TICs), but may not be able to deploy those resources quickly. “What if we can have something that is more flexible, that you can maybe just throw out in the water and start searching minutes before the boat has even entered the water?” says Johansson, explaining the advantage of the portable, easily deployable SORA unit.

Johansson’s concept for SORA is that the unit would include artificial intelligence to plot a search pattern and automatically identify a possible drowning victim, though the device could also be controlled and monitored from land.

During the design process, Johansson consulted with several product designers at Teledyne FLIR: Anton Hoffman, Jonathan Richardson, and Lars Hakansson. Teledyne FLIR has a long history of collaboration with the Umea Institute of Design, encouraging young designers to incorporate FLIR products and think about the FLIR brand in fresh and creative ways.

“I always found FLIR an interesting company,” says Johansson “The products [FLIR] does and working with the first responders—it felt like it was a perfect fit for the project.”

Johansson worked on creating a balance between FLIR’s existing design language and a new look specialized for water rescue.

“We think these kinds of collaborations are very important,” says Anton Hoffman, Manager of Product & User Experience Design at Teledyne FLIR. “Besides the fact that this helps in making Teledyne FLIR an attractive workplace for designers, we also expose ourselves to new methods, fresh thinking, and new creative ways to see things.

“What we emphasize in our process is the user contact, and we constantly push the students to get real life experience and to verify and test ideas with real users,” he continues. “Jenny’s project is an extraordinary example of such a process and the whole journey has been impressive.” 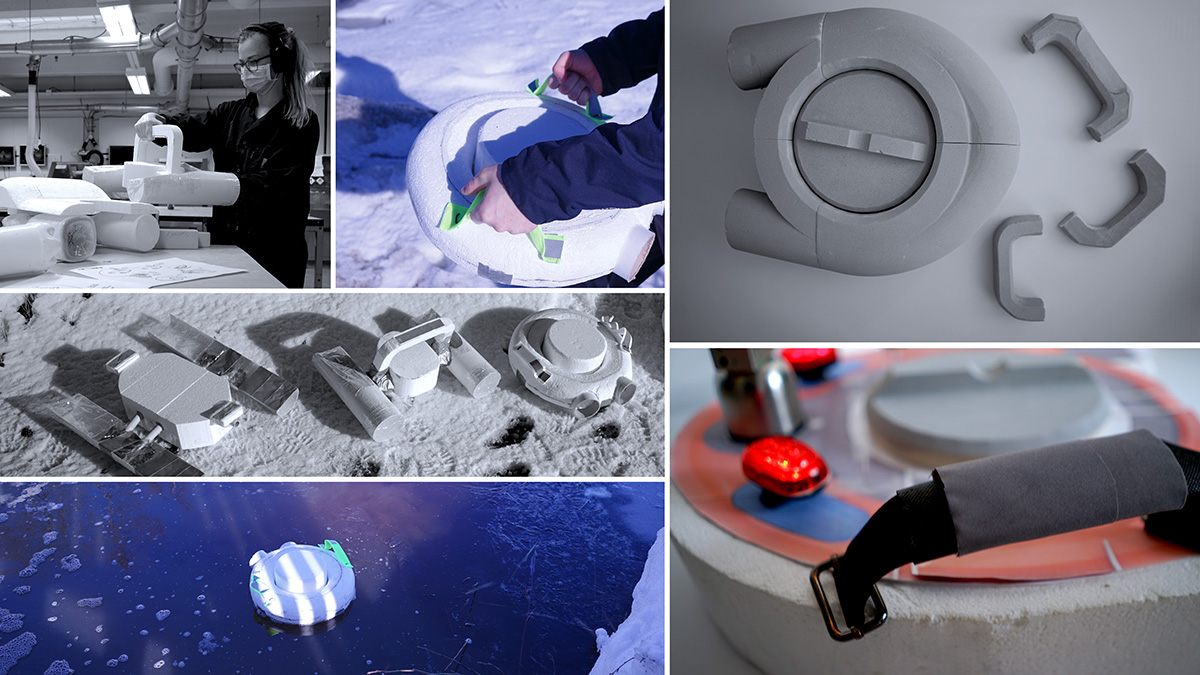 Johansson will continue to present on her concept design to rescue professional, other experts, and designers at Teledyne FLIR. “I think there's a lot of future development possibilities for this project,” she says. “It's a concept that can hopefully inspire and show a vision of how this could work and how it could improve today's search and rescue missions.”

During the 20-week project duration, Johansson was able to build out several foam models to test SORA’s shape and usability, but has not yet had the opportunity to build a full prototype. If she’s able to continue the project, next on the agenda would be building function prototypes and testing them out in the water.

Learn more about SORA at www.uid.umu.se/en/uid21/project-gallery/apd/jenny-johansson and reach out to Johansson on her website at www.johanssonjenny.com