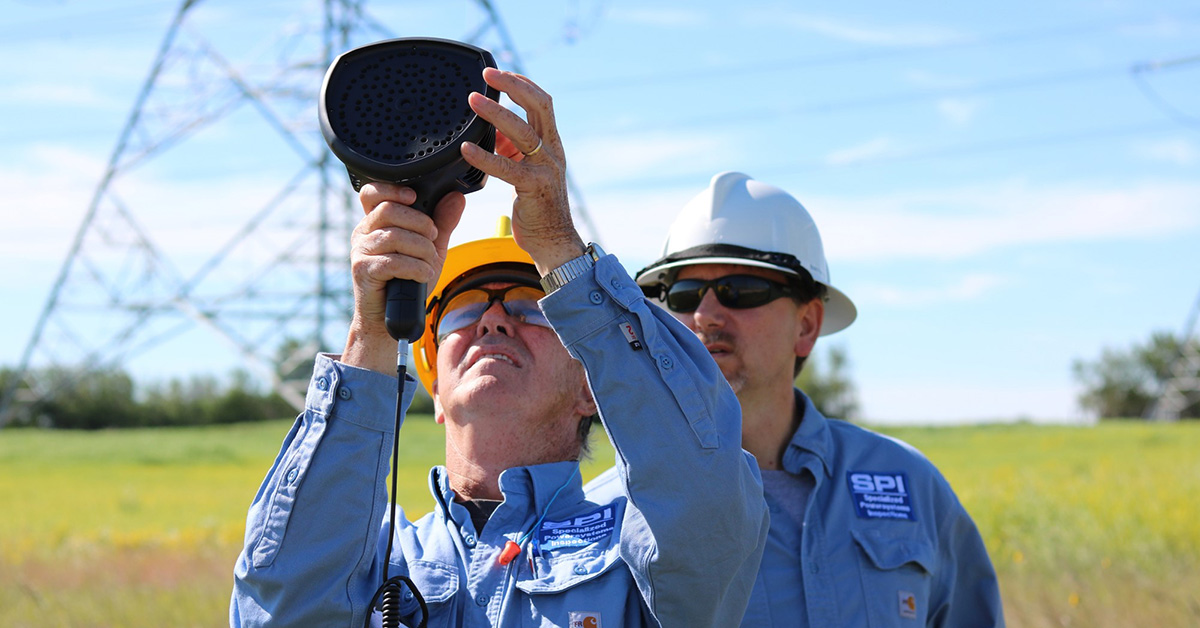 SPI Inspections provides their customers with top-notch utility system and infrastructure inspections, relying on their extensive experience in the field and advanced inspection technology. The team uses UAVs, FLIR thermal cameras, and other high-tech equipment to deliver qualified inspection services and independent verification of construction standards and monitoring of power systems.

Recently, the team at SPI Inspections test-ran the new FLIR Si124 acoustic imaging camera. Built with 124 microphones, the Si124 produces a precise acoustic image that visually displays ultrasonic information in real time on top of a digital camera picture. This allows the user to visually pinpoint the source of the sound. 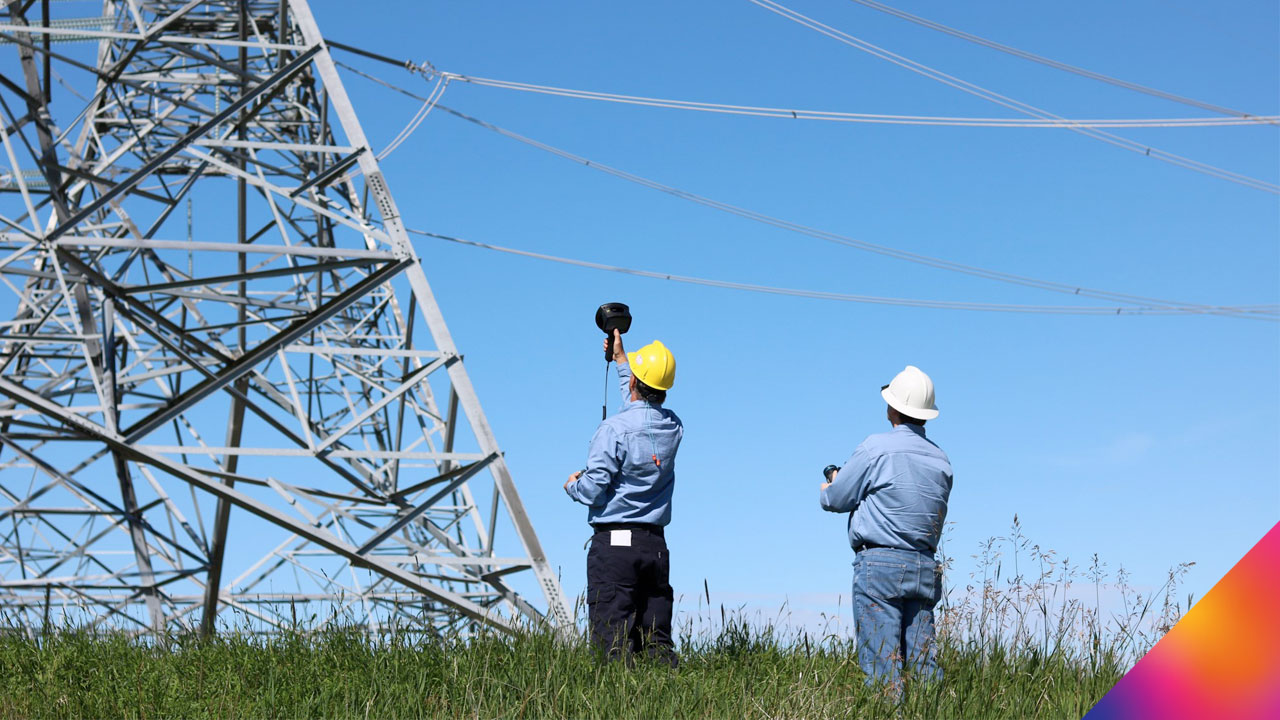 The founders of SPI Inspections have more than 100 years of combined experience working with utility systems, from building power lines to inspecting substations. “We’ve been around the block a few times,” says Elton Hunter, Field Manager at SPI. “Our background is basically power, from where it's made in the generating facility to where the meter is—either the meter on your home or the meter on your business.” 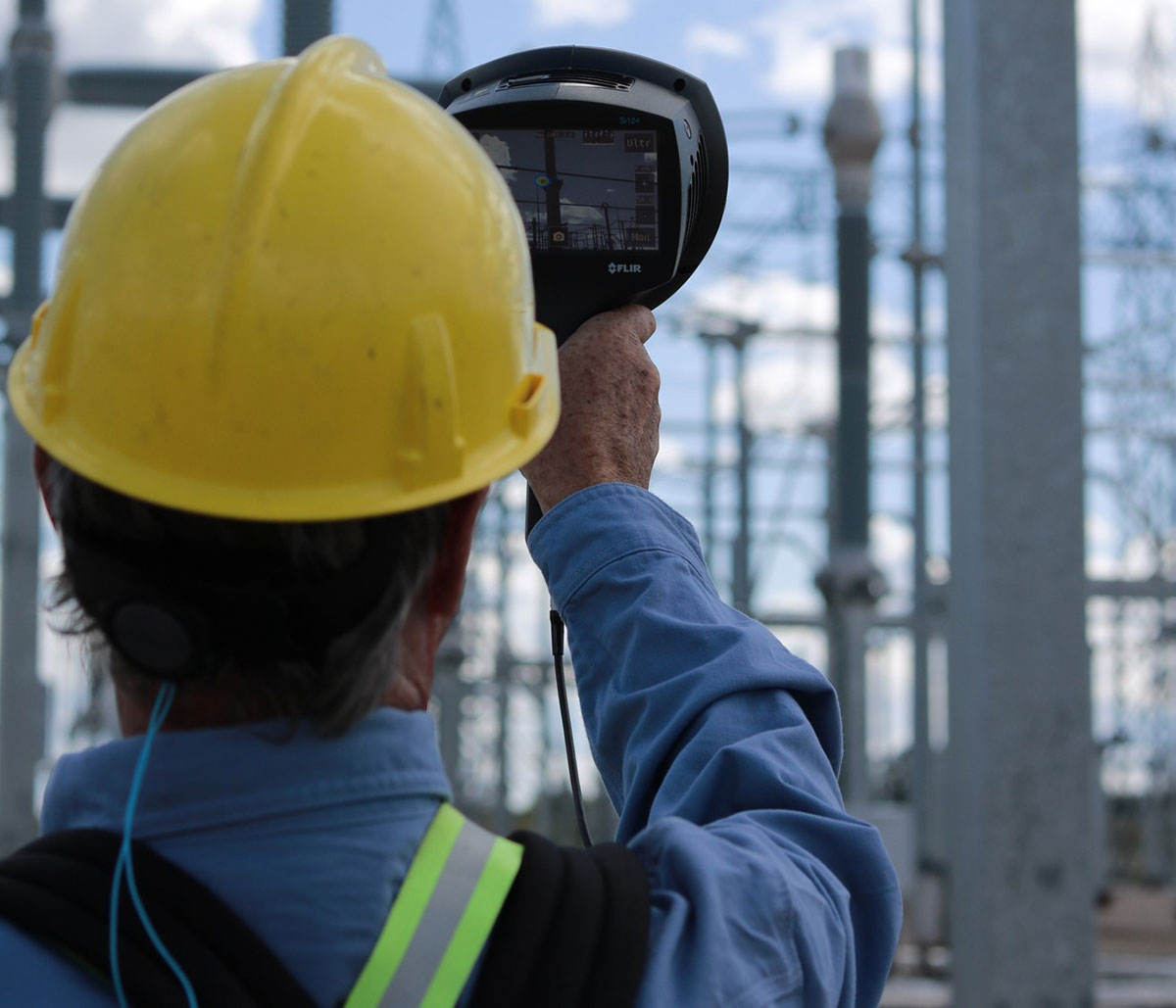 The FLIR Si124 is a lightweight, one-handed solution that can identify issues up to 10 times faster than with traditional methods.

“We've really assisted our customers,” says Hunter. “Our goal is to make their systems work better, safer, and be more reliable.” The team at SPI Inspections found the FLIR Si124 to be an invaluable asset in detecting partial discharge, a sign of approaching or imminent failure in power infrastructure.

The Tools of Inspection

The journey of electricity from power plant to lightbulb in your home presents plenty of opportunities for failure if infrastructure isn’t properly maintained. SPI uses their extensive experience to recognize when an element needs maintenance, aided by advanced technology. “We bring a lot of technological tools to the trade,” says Hunter.

Among the tools in their arsenal is the FLIR GF77 gas detection camera, which allows them to spot sulfur hexafluoride (SF6) leaks in electrical installations as well as detect hot spots. The GF77 is a multi-use camera that can detect a range of gases just by changing out the lens. When equipped with an HR Lens, the camera can visualize sulfur hexafluoride, while an LR Lens allows the camera to see methane, ethylene, ammonia, and other gas emissions. The camera is also calibrated for temperature, so it functions as a standard thermography camera use to reveal a wide range of utility issues. 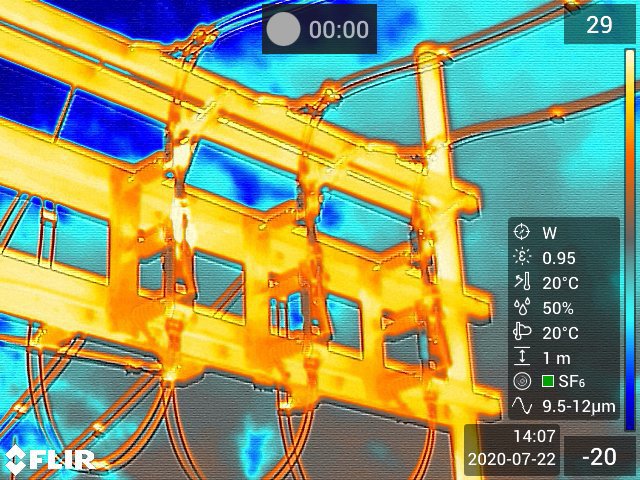 The FLIR GF77 offers both radiometric temperature measurement and the ability to detect a wide range of gases by simply changing lenses.

Having relied on FLIR gas detection cameras for previous inspections, the SPI team was excited to get their hands on the Si124 and see what it could do. Though acoustic imaging cameras are often used to locate pressurized leaks in compressed air systems, the Si124 is also a very effective tool for detecting partial discharge from high-voltage systems.

Partial discharge—caused by a breakdown in electrical insulation—can be detected when the air around the breakdown becomes ionized, creating a phenomenon called “corona.” Corona can be quickly detected by acoustic imaging, identified by a “meatball” of sound in the image. “For us, that's invaluable,” says Hunter.

The team had previously been using ultraviolet technology to detect corona and were pleased to find that the Si124 achieved about the same result for a fifth of the price. “The Si124 basically does the same job and it's very easy to use,” explains Brett Fleming, Corporate Manager at SPI Inspections. 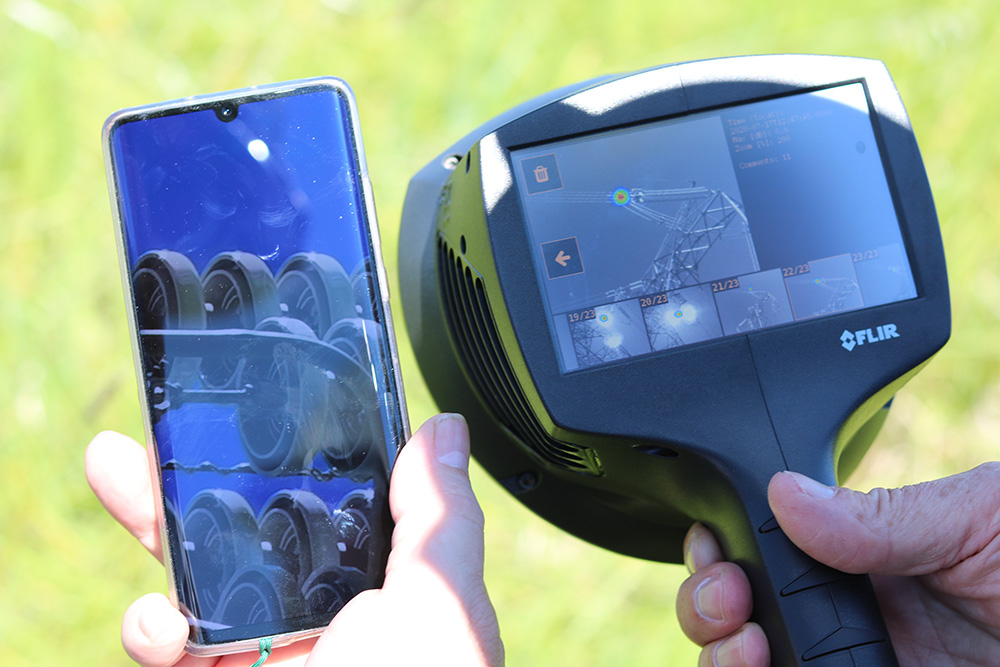 Because so much of their work is done in the field, it’s important to the team at SPI Inspections that their tools are ready for the job. “It's very user friendly,” says Hunter about the Si124. “Within a half-dozen hours, we were very confident working with it.”

“The camera has wonderful clarity for us in the field,” Hunter continues. He said his team appreciated the quality of the images, ease of download to a laptop or the cloud, and the functionality of the user interface. “We're guys that have been in construction for 40-plus years—we've got arthritis and big swollen fat hands hitting hammers and stuff. The user interfaces—the keys, the touch boards—are very user friendly. We found them very easy to work with.”

The Si124 made it much easier to spot failures from the ground. During their test run of the camera, they found a failure on a power line 220 feet up in the air, a difficult issue to detect. “With our drones we could, but we would have known where to look,” says Hunter. “Because of our field experience we were able to pick it out and zoom in on it, then we knew that there was a bit of a problem up there.”

“That's a 25-million-dollar failure on a line that's only five years old,” he remarks. With the Si124 they were able to catch the problem early, before the cost to fix it became nearly that high. 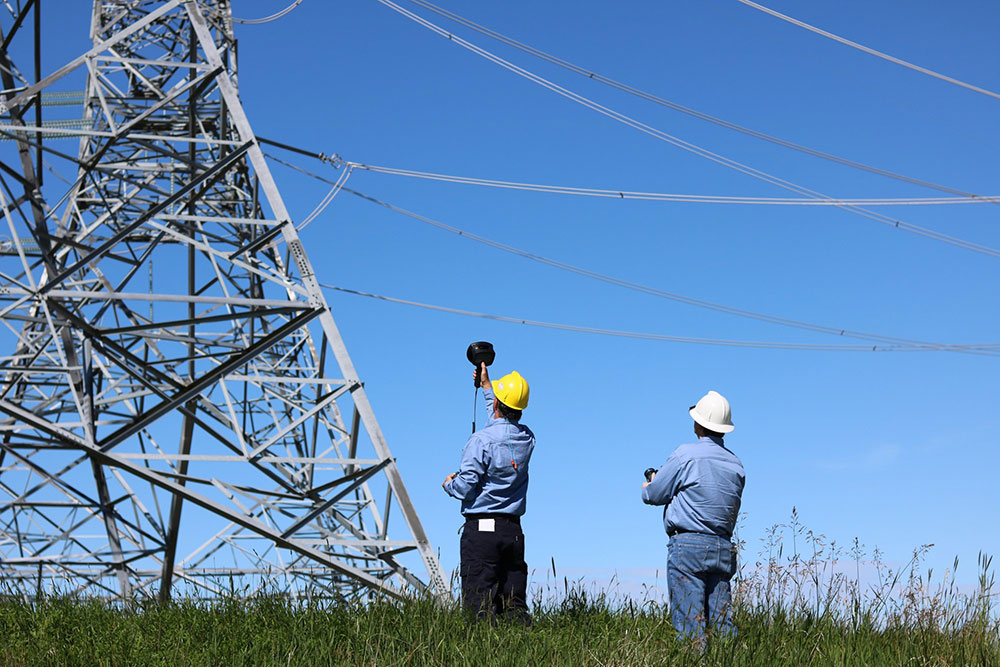 Electrical substations and other utility infrastructure present numerous hazards for workers and inspectors. When the team confronted a particularly dangerous area inside the substation where a capacitor bank had come down, they were required to stay outside the chain-link fence enclosing the area. They were pleased to find that the Si124 could look through the fence to assess the situation.

“We were able to walk right up, and we could look right through the chain-link fence. Because there's 124 microphones on the front of the camera and then one little tiny camera,” Hunter explains, “that camera was able to look right through that two by two inch square and keep our people safe, which is a huge advantage for us being in the field.”

If we do our jobs right, nobody ever knows we're out there.

SPI’s goal during inspections is to catch issues before they’re allowed to escalate too far. Spotting partial discharge and corona early with tools like the Si124 helps them anticipate failures and keep the lights on for their clients. “It allows us to preemptively prognosticate what's happening in our power line,” says Hunter. “So instead of there being a catastrophic failure and then an outage and a repair, we can go in ahead of time and we can tell them, ‘hey, you're going to have a problem with this if you don't fix it’.”

Unplanned outages can be prevented with regular inspection and maintenance.  “If we do our jobs right, nobody ever knows we're out there. The customer doesn't know we're there; we go do our job, we make recommendations, and then through planned outages or regular maintenance they can repair something.”