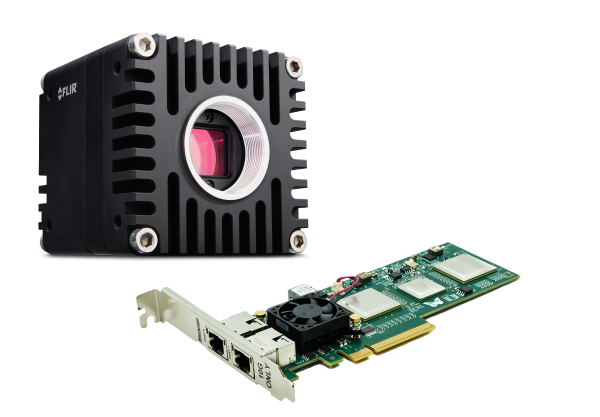 While 10GigE Vision has increased bandwidth 10 times over the GigE Vision protocol, 10GigE host adapter performance has not kept up. Transferring data from camera to host generally results in overloading the CPU, leading to application buffer overflows, and a level of packet loss which is unacceptable for demanding applications.

By using host adapters to handle packet receipt and image reconstruction directly on the card, the CPU no longer needs to manage these tasks. Teledyne FLIR Oryx + Myricom bundle is specifically designed to address such situations. As noted in our test results below, system reliability can increase dramatically, resulting in significantly reduced packet loss, and in turn, dropped frames.

The bundle works seamlessly with our new custom SDK driver devoted to handling data provided by the Myricom card. With this combination, image data transfers flawlessly and reliably from camera to host PC. See test results below in Appendix: Reliability and CPU Usage testing.

The price to performance ratio of our Teledyne FLIR Oryx + Myricom bundle make it an easy choice; providing an affordable and highly reliable setup compared to purchasing and integrating hardware separately.

Theoretically, CPUs could devote up to 100% of one of its cores for handling incoming data from a 10GigE connection and multiple cores can be utilized when running multiple applications / cameras. By using the Myricom card to manage packet receipt and image reconstruction, CPU usage goes down to as low as 1% for each application, allowing for additional CPU cycles to be used for image processing. See test results below in Appendix: Reliability and CPU Usage testing

10GigE Vision frame latency is not deterministic; this means frames can arrive with a significant time jitter. In some conditions, especially with switches, not only is there packet loss, sometimes frames are received in opposite order. The Teledyne FLIR Oryx + Myricom bundle addresses this with timely notification of frame completions for lower latency and less jitter.

Note: CPU Usage was checked throughout the 7 days of testing and found to stay consistently at 1%. With the new Myricom driver disabled, and solely relying on the FLIR standard filter driver, CPU usage for the CPU core devoted to the application stayed at roughly 100%.

This test includes two Oryx cameras (ORX-10G-123S6M and ORX-10G-89S6C) running in the same custom console application, each capturing images at a bandwidth of 6.7 Gb/s, for 24 hours continuously.

This test includes a single Oryx camera (ORX-10G-123S6M) with the same settings as in Test 1.

The same console application used in Test 1 is used, except this time, another application is used at the same time; this custom application is meant to simulate a high workload, taking up about 90% of total CPU utilization (across all eight cores).